Zygarde (Japanese: ジガルデ Zygarde) is a dual-type Dragon/Ground Legendary Pokémon. It is not known to evolve into or from any other Pokémon, but it does have several formes: two of them (Cells and Cores) exist in multiples and can merge to form the remaining three formes, depending on the amounts used.

The Zygarde Cell resembles a flattened Zygarde Core and make up most of Zygarde's body. They lack will or thought process and accordingly listens to the Core's orders. Zygarde Cells also lack the power to use moves like any other Pokémon, so it's debatable whether they are actually Pokémon or not.

The Zygarde Core is a small, blob-like creature that represents part of Zygarde's brains. Cores are self-aware and can communicate with Cells and other Cores by using telepathy. Cores usually take action when sensing a disturbance in the ecosystem.

Zygarde 50% Forme is what was thought to be the initial and only forme, and resembles a snake-like creature. Forming a trio with Xerneas and Yveltal, Zygarde controls the local ecosystem on its own. It's discovered recently that this Zygarde only has half of its Cells in its body, hence the name.

Zygarde 10% Forme is the forme a Zygarde Core takes when it gathers only 10% of the Cells. This forme resembles a Dobermann and can run up to 60 mph, or 10 km/h. It defeats its enemies by using its speed and its sharp fangs.

Zygarde Complete Forme is the forme that takes shape when all of the Zygarde Cells have gathered. When the ecosystem is threatened, the Zygarde Core decides that the 50% forme is not enough to deal with the threat, and resorts to this forme instead. This form is said to be more powerful than Xerneas and Yveltal themselves.

Zygarde has a serpent-like body with a green and black pattern on it. There are black frills on the back of its head like a frilled lizard. Its eyes comprise four green hexagons like the compound eyes of of an insect. More green hexagons are on the front and back of its frills. These hexagons glow in certain patterns like a computer processing information. Its tail is flat and is black on top and green on the bottom. Its tail ends with five separate green tendrils. It is said to monitor the ecosystem, and if the ecosystem falls into disarray, it appears and reveals its power. Zygarde is the only known Pokémon that can learn Land's Wrath.

Zygarde's appearance is based on a serpent in the shape of the letter Z. It may also draw inspiration from both the Níðhöggr and the Jörmungandr. Jörmungandr, often written Jormungand, or Jörmungand and also known as the Midgard Serpent (Old Norse: Midgarðsormr), or World Serpent, is a sea serpent, the middle child of the giantess Angrboða and Loki. According to the Prose Edda, Jörmungandr is punished by Odin by tossing it into the great ocean that encircles Midgard. The serpent grew so large that he was able to surround the earth and grasp his own tail. Níðhöggr is the serpent from the Poetic Edda which resided at the bottom of the world tree Yggdrasill and gnawed at its roots. The patterns spread upon Zygarde's body are very similar to and may be based upon ribose and deoxyribose molecules. Its tail is possibly based in shape on base pair codons, the essential building blocks of the DNA double helix.

Zygarde comes from the letter Z. It may be derived from ζυγωτός zygōtos (Greek for joined), zygote, and garde (French for guard), and zygōtos and midgard (Old Norse: Miðgarðr). 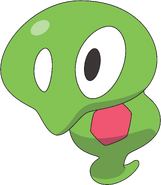 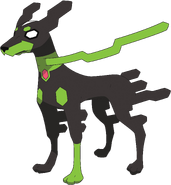 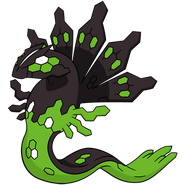