Zweilous is a dark-blue, quadruped Pokémon with two heads and black fur covering its two necks and back. Its front legs are muscular with two claws on each foot, but its rear legs that are less defined and have two small, backward-pointing toes without claws. There are tufts of fur over its heads with rounded points at the top. It has two thin wings on its back, with each wing ending in two points. The fur stops at the chests and opens up to fuchsia striped bands on the side of its legs. Though it appears to lack eyes, it is unknown if Zweilous is blind.

Zweilous has the vigor and energy to eat and bite constantly without stopping. Its heads dislike each other and are very hostile. As a result, the heads often turn eating into a competition. Whichever head eats more than the other gets to be the leader. Because of this, Zweilous always eats far too much. It is a nomadic Pokémon; it migrates once it has eaten all the prey in an area. 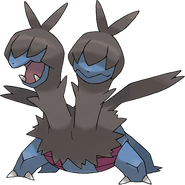 Add a photo to this gallery
Retrieved from "https://fantendo.fandom.com/wiki/Zweilous?oldid=2938776"
Community content is available under CC-BY-SA unless otherwise noted.