Start a Wiki
Zuper Zario Zrothers Zxtreme is a platforming title for the Nintendo Comet. It features the debut of two new Mario characters, Zario and Zoshi. The game features Zario going on a quest to face Zowser after he has infested Zarland with rabid cows. Lucky, Zoshi is able to help Zario tame the rabid cows to assist them in their adventure.

Zowser, up to his usual shenanigans, decides to induce his wrath on Zarland for no reason. He goes to his laboratory and implants the rabies virus into a cow. He then rapidly regenerates it, causing an army of rabid cows to appear. He sends them off to Zarland. Meanwhile, Zario is off on a mountainside walk when the rabid cows reach him. He touches the mountain, triggering an avalanche, annihilating some cows. He then hops on a cow and uses his powers of seduction to lure it into his control. He is able to flee, but not before the rabid cows destroy the mountain, causing an implosion which nearly kills Zario. He is left to die, but luckily Zoshi manages to rescue him. By that time, the cows have spread across all of Zarland and the two must defeat them all.

The game is a 2D platformer, similar to the New Super Mario Bros. series. Individual aspects of the game are rather similar to the 3D Mario games, such as Super Mario Galaxy, with special types of jumps and abilities Zario or Zoshi can perform. Levels are much more detailed than simply the world's theme with a few add-ons, having some interesting gameplay features. These include riding rabid cows, which have a variety of functions within the game. 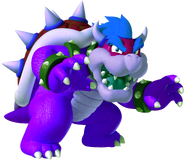 Zoshi's artwork for the game.

The logo.
Add a photo to this gallery
Retrieved from "https://fantendo.fandom.com/wiki/Zuper_Zario_Zrothers_Zxtreme?oldid=3013033"
Community content is available under CC-BY-SA unless otherwise noted.