Zukia is one of the main villains of Sonic Trials from the Sonic the Hedgehog series. She's a Zeti from the Lost Hex and a female member of the Deadly Six.

Zukia is a greedy person that cares more about money than showing some initiative, only feeling motivated after getting complimented. She's also quite vain about her cash, taking frequent care of it, and getting furious when someone steals it. Zukia is also characterized with other feminine tropes, such as a liking for fashion. She is a year younger than Zeena and a year older than Ziggy.

Zukia has a feminine body physique, having a maroonish-pinkish torso and curled tail, and black legs, hands, and a single right horn (the latter also having pink stripes). Her body is also covered with two black waves, and a black skirt to match. Zukia has two big round eyes, with yellow sclera, maroon irises, black rims and yellow eyelids. Her lips are also yellow.

Zukia has pastel hair in seven strands, red, orange, yellow, green, blue, violet, and pink. Zukia's nails are pink, like the stripes of her horn, but the two toes she has are just as pink as her body. The talon on her heel is like the others.

“Correct. You've got the right girl group for the job!”
— Zukia
“Pinheads in Pursuit! Compulsive Curators! Teleporting Terrors! You all are terrible!”
— Zukia
“Hurry up, Zeena! Why are you slow? I would hurry up if I were you. Also, As Zor would say, "Why is Zeena ALWAYS getting ready for literally EVERYTHING?! And why does it ALWAYS have to be HER NAIL ART?! Jeez, I'm giving her a bad review." UGH!”
— Zukia 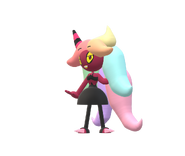