Zoroark (Japanese: ゾロアーク Zoroark) is a Dark-type Pokémon. It evolves from Zorua starting at level 30.

Both it and Zorua were the first Generation V Pokémon to be revealed to the public on February 10, 2010. Zoroark initially debuted as a silhouette before being revealed in full.

Zoroark is a bipedal, gray-brown, fox-like Pokémon with crimson and black accents. It has a pointed snout and ears with red insides. It also has some red rimming its eyes and mouth. It has a large, red, voluminous mane with black tips, which somewhat resembles a ponytail, as a teal bangle down its length separates a mass of the mane from the lower portion. It has a black ruff on its upper body, pointed at the shoulders from which its arms extend. Its upper arms are thin, whereas its lower arms, while still slim, are bulkier. The arms have spiky extensions of fur at the elbows, and it has red claws on its hands and feet. Zoroark's eyes are red-rimmed with light blue irises.

Zoroark can create illusions that are indistinguishable from reality, deluding many people simultaneously. It can even create illusory landscapes in the forests where it dwells, to hide its territory and protect its den. However, Zoroark is incapable of physically changing itself into another form; it is merely capable of casting illusions. When a Zoroark takes the form of a human, it is capable of human speech. It can make convincing illusions of attacks, and these illusions are extremely realistic, enough to fool even cameras and make one believe they're being physically affected, though the illusion does not have any direct physical effect. Zoroark, along with its pre-evolution Zorua, are the only Pokémon capable of learning Night Daze.

Zoroark lives in groups, where unity is strong. It is extremely protective of those it cares about and will go to any lengths to keep them safe, including risking its own life, and it can hold grudges on those who harm its loved ones. Zoroark will hide its Zorua young in its mane to protect them and carry them around. There are stories that say Zoroark punishes those who attempt to catch it by trapping them in an illusion.

Zoroark appears in the game as an unlockable character, replacing Lucario.

Zoroark is an unlockable character who appears in Super Duper Smash Bros.

Fades in from invisibility.

Jumps up and down.

Claps to the winner while turning grey. 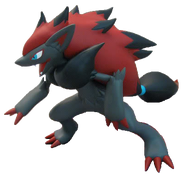 A 3D image of Zoroark 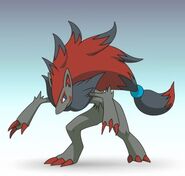 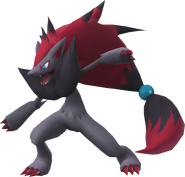