Zomom is one of the main villains of Sonic Lost World from the Sonic the Hedgehog series. Zomom is a member of the Deadly Six, a group of six Zeti from the Lost Hex.

Zomom's two most prominent traits are his lack of intelligence, and his endless apetite, often failing to understand figures of speeches and getting distracted easily by food. Due to his girth, Zomom is one of the stronger Zeti, as well as the heaviest.

Zomom is a rotund, egg-shaped, demon-like being that is most prominently orange-yellow, but also has a black underside. He has five short horns adorned on top of his neckless head, each having a red stripe. His face consists of a big mouth with thick yellow lips and uneven teeth, as well as a pair of two small, round eyes with yellow sclera, red irises and black rims.

While he has large arms, Zomom's legs are short and almost non-existent. He also lacks any semblance of hair or a tail. His hands are, fittingly for his arms, quite large as well, each with five fingers and yellow, stubby nails. His black feet have two yellow talons for toes and another one on the heel.

He looks skinnier in Sonic Trials, having a orange topknot and muscles. 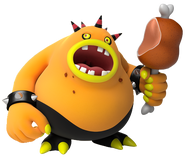 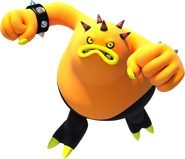 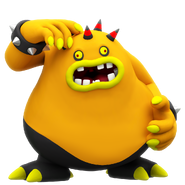 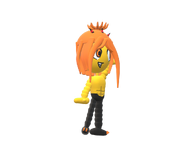 Sonic Trials Artwork.
Add a photo to this gallery
Retrieved from "https://fantendo.fandom.com/wiki/Zomom?oldid=3127362"
Community content is available under CC-BY-SA unless otherwise noted.