Zomboomba is an undead sub-species of the Goomba. They made their debut appearance in Super Mario Bros. 3D where they appeared in Worlds 3, 4 and 8, it has also been shown that Kamek is able to turn normal Goombas into Zomboombas with the use of his wand. Zomboombas will typically attack the player by charging towards them and attempting to bite the player, if you are bitten by a Zomboomba it deals the same amount of damage as running into a normal Goomba however the Zomboombas move much faster so are harder to avoid.

Zomboombas are undead Goombas covered in cuts and stitches, they also have bloodshot eyes and cracked teeth.

The Zomboombas made their first appearance in Super Mario Bros. 3D. They first appeared as rare enemies in World 3-2 where they would simply act how normal Goombas act (walking aimlessly), they then appeared again in world 4-5 where they would charge towards the player and attempt to bite them. Zomboombas were then summoned by Kamek during the boss battle with him at the end of World 4 where he would turn normal Goombas into them with his wand. They later were seen during World 8-1, 8-2, 8-5 and 8-7 where they were extremely common and would usually be encountered in groups.

A Zomboomba appears as a racer in Mario Kart: Blazing Wheels. They are unlocked by playing as the Zombkoopa 2 times.

Zomboombas, along with other Zombified minions of Bowser, appear as enemies on Yoshi's Island, as servants of Yoob.

A full gallery of all artwork of the Zomboombas. 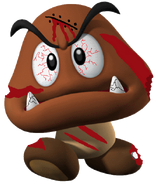 Super Mario Bros. 3D
Add a photo to this gallery
Retrieved from "https://fantendo.fandom.com/wiki/Zomboomba?oldid=1963692"
Community content is available under CC-BY-SA unless otherwise noted.