Zole is one of the main villains of Sonic Trials from the Sonic the Hedgehog series. Zole is the second youngest member of the Deadly Six, a group of Zeti from the Lost Hex. He is a year older than Zor.

Zole is the most prankster-like and sarcastic member of the Deadly Six, constantly trying to be funny. He is Canadian, but has a Scottish accent. When fused with Zor, they form Zuzu.

Zole often suffers from really bad stomachaches and feels the urge to use a bathroom. He seems to carry a heat pad and make jokes about gastrointestinal diseases to cover up his embarassment.

Zole is an upright being colored in dark blue and black. He has a medium-length blue hairstyle with strands that flare upwards and a curled ahoge, as well as short horns with violet stripes under a black beret. His head is oval-shaped, and his face consists of circular eyes with yellow sclera, yellow and pink irises (meaning he's got heterochromia) and black liners. He was once seen with a cyan gem on his stomach.

Zole seems to cover his eyes with a black mask with pale yellow oblong eye like spots. He also wears black, fingerless gloves and has a thin tail. Zole has cyan, bitten fingernails, as well as two talons on his feet and a short one on his heels.

“Well what if I told you three you were fast enough, smart enough, pretty enough to beat that blue nuisance?”
— Zole
“Aight, I'm a delete the blue nuisance!”
— Zole
“Look at him, all "I'm so fast" and stuff. Urgh, makes me feel sick. Time to knock him down a few pegs.”
— Zole 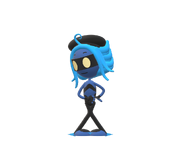