Start a Wiki
“With all the babies in the world kidnapped, I will be free to rule this world!”
— Zinith


Zinith is a Yoshi sorcerer and the main antagonist of Yoshi and Kamek. In the game, he seeks world domination by kidnapping all babies across the world, making sure that they don't grow up into heroes to stop him. This leads to an unlikely partnership between the Yoshis of Yoshi's Island and Kamek.

Zinith resembles a normal Yoshi with a dark-turquoise skin color, white stomach and cheeks, and a big nose. The spikes on his head, however, are notably smaller than that of a normal Yoshi's and there being five instead of the usual three. He also has claws on his fingers and presumably toes, similar to Boshi.

Zinith's attire consists of a large, dark-navy scarf with circle, square, and triangle patterns on it, which drags down to his feet. He also wears a large, pointed mage's hat with a similar pattern. His shoes are magenta, and have spikes on the soles. He also wields a wand, similar to a Magikoopa's, but it has a larger orb at the top that is clear.

Zinith is cold and ruthless, traits extremely uncommon among Yoshis. With a thirst for world domination and power, he is stubborn and determined, and will stop at nothing to get what he wants. However, he is also cunning, being able to devise a plan and set it into action with no trouble. He has also shown to have no remorse or care for anyone but himself, as shown when he tries to feed Baby Peach to Nate the Nipper Plant.

It is implied that he wasn't always evil, and was once a friendly Yoshi living among the clan on Yoshi's Island. For one reason or another though, he studied dark sorcery, which eventually corrupted him and turning him into the mage he is today.

As mentioned, Zinith is a master of sorcery. Many of his spells are performed via his scepter. He has a wide range of abilities, from creating balls of energy, mind controlling, teleportation, pyrokinesis, cryokinesis, psychokonesis, and even the ability to shrink and enlarge himself or someone else.

Other than this, Zinith has the abilities of a typical Yoshi, being able to swallow objects whole with his tongue and turn them into eggs, which like his body, are dark-turquoise colored. He can also use the Flutter Jump, but because of his levitating abilities, he barely needs to use it. Furthermore, he also possesses a decent amount of physical strength, rivaling that of Wario and Donkey Kong.

Zinith appears as the main antagonist in Yoshi and Kamek. For most of the beginning of the game, he is kept hidden by a cloak he wears. The first time he is seen is storming into the Koopa Kingdom castle and kidnapping Baby Bowser from Kamek, as well as hypnotizing all of his minions under his command. This leads to an alliance between the Magikoopa and the Yoshis.

He is later seen in World 1-8: Nate the Nipper Plant's Castle. He is seen with Baby Peach and tries to feed her to Nate, but Yoshi throws an egg, saving her. This egg hits Zinith, revealing his face. Enraged, he enlarges Nate to massive size, commanding him to eat Yoshi and Kamek as he escapes.

Zinith in Yoshi and Kamek 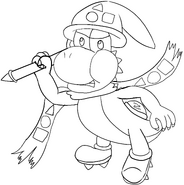 Retrieved from "https://fantendo.fandom.com/wiki/Zinith?oldid=2865887"
Community content is available under CC-BY-SA unless otherwise noted.