Not to be confused with Zephiel (Fire Emblem).

Zephiel is one of the main villains of Nintendo + Steven Universe: Kingdom Battle, a crossover game between Nintendo, Sega, and Steven Universe. He is a fusion of Zor and Zaeriel. His weapon is a shield. His minions are Valkyries and Ziggies.

Zephiel is a diminutive, slouching being colored in light beige and black. He has a medium-length pink hairstyle with with large bangs that cover his eyes, as well as a pair of curved horns, and a pair of curved upright horns, each with mauve stripes. His head is oval-shaped, and his face consists of large, pink lips, moody eyes with yellow sclera, Bondi blue irises and black bags, and tiny freckles.

Zephiel seems to carry two mauve roses around and seems to use them as magic wands. He also wears black, fingerless gloves, and has a thin tail. Zephiel has mauve, stubby fingernails, as well as two talons on his feet and a short one on his heels.

“He's going to have a bad time!”
— Zephiel (Zaeriel's half)
“Seriously, we captured you, but not Him! How pointless are you. My other half is wrong!”
— Zephiel (Zor's half) 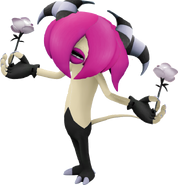 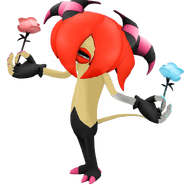 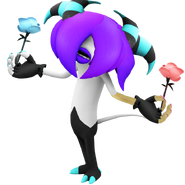