Zeena is one of the main villains of Sonic Lost World from the Sonic the Hedgehog series. She's a Zeti from the Lost Hex and a female member of the Deadly Six.

Zeena is a feisty person that cares more about treating herself than showing some initiative, only feeling motivated after getting complimented. She's also quite vain about her appearance, taking frequent care of it, and getting furious when someone ruins her nail art. Zeena is also characterized with other feminine tropes, such as a liking for fashion and being flirtatious. She is a year older than Zukia and two years older than Ziggy.

Zeena has a feminine body physique, having a pale green torso and curled tail, and black legs, hands, and a single left horn (the latter also having magenta stripes). Her waist is also covered with two black stripes, and her wrists have one stripe each. Zeena has two big round eyes, with yellow sclera, blue irises, black rims and yellow eyelids. Her lips are also yellow.

Zeena has green hair that is about as long as herself. Zeena's nails are magenta, like the stripes of her horns, but the two toes she has are just as green as her body. The talon on her heel is pointed down, so her small feet bear resemblance to high-heel shoes.

“Ugh! You're gonna pay for that! As soon as my nails dry.”
— Zeena
“We promise, you'll be happy in our service.”
— Zeena
“I think you got the right girl for the job!”
— Zeena 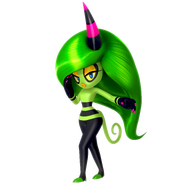 Sonic Trials Artwork.
Add a photo to this gallery
Retrieved from "https://fantendo.fandom.com/wiki/Zeena?oldid=3127366"
Community content is available under CC-BY-SA unless otherwise noted.