Zavok is one of the main villains of Sonic Lost World from the Sonic the Hedgehog series. He's the former leader of the Deadly Six, a sextet (fanonically nontet) of Zeti that hail from the Lost Hex.

Zavok is a fierce and cruel being that is powerful and cunning, yet also calm. Even when he is angry, Zavok manages to get his temper in check. Zavok is the most serious among the Deadly Six, not tolerating any failure. Zavok was a disciple of Master Zik, who he respects greatly.

He used to be the leader until Master Zik handed Zor the Leader's Staff.

Zavok is a bulky demon-like being, having a red mandible, torso and tail, and black legs, head and curved horns (the latter having gray stripes as well). Zavok also has a cyan ponytail, and his eyes, with yellow sclera, purple irises and red bags, are also adorned with large, cyan eyebrows.

His shoulders are adorned with a pair of black spikes on each, and he bears spiked bracelets around his wrists. His five-digit hands bear cyan nails, and his feet have two cyan talons for toes and another talon on his heel.

Zavok is often called to resemble another villain.

“Your fate is to be destroyed. Why don't you just accept that? Lie down and die!”
— Zavok
“You are quite the might conquerer”
— Zavok
“Strike brothers! Make the fool pay for our abuse and enslavment!”
— Zavok
“Oh, don't worry. We're actually making him better. He'll be much happier as a robot! Mwhahahaha!”
— Zavok
“Give up now and join your friend!”
— Zavok
“One by one, your friends are falling. Soon, you'll be all alone.”
— Zavok
“Well what if I told you you were fast enough, smart enough, pretty enough to beat the blue nuisance?”
— Zavok 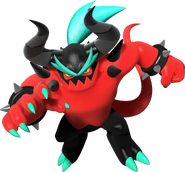 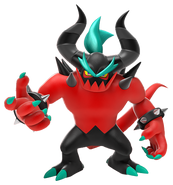 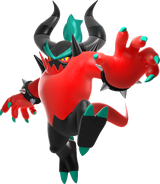 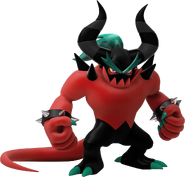 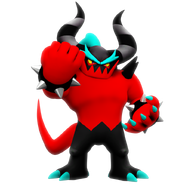 Sonic Trials Artwork.
Add a photo to this gallery
Retrieved from "https://fantendo.fandom.com/wiki/Zavok?oldid=3127371"
Community content is available under CC-BY-SA unless otherwise noted.