Fantendo - Game Ideas & More
Register
Don't have an account?
Sign In
Advertisement
in: Free to use Characters, What is the New Fantendoverse?, Females,
and 8 more

Zambja Eebra is a superpowered human hailing from a unknown country, traveling across the world similar to Crow. She is known for her unusual set of powers and her odd appearance. The character was created by Helena Harper (t∣b∣c) as the second of a set of 8 or more new characters to be created in April.

Zambja Eebra is a super powered human that has a unknown background, and like Crow, travels across the globe as a "wild woman". She is typically in conflict with the government, due to her distrust for them as well as the fact they usually want to detain her for her powers. She has a very unusual set of powers, being magnetic through her toughened zebra-striped skin and being able to channel ice and fire through her hands.

She joined CHELPRO sometime before the 2020 World Tournament under the understanding that she would still be allowed and even encouraged to live a isolated wild woman lifestyle so long as she continued to fight against F.A.N.T.

Zambja Eebra is a pale-skinned human woman with black stripes running across her whole body, similar to that of a zebra. This skin is magentic as well as reinforced and toughned, allowing her to sustain herself against strong attacks. She has black hair and has a heterochromatic set of eyes, with one red and one blue colored eye. Her hands are a solid red and blue, with this color running down her forearms. She typically can be seen wearing a loindress with a black rope tied around it, presumably skinned from another zebra-stripped animal. This is the only thing she wears.

Zambja Eebra is a character that is fairly easy-going, merely wanting to live a free-spirited life away from most civilization. Due to her powers, she is a tantalizing target for the military and especially F.A.N.T, of which she has quickly begun to hate and occasionally joins W.R.A.I.T.H to fight against them. Despite this, she doesn't display hostile feelings towards individual members but rather just the organization as a whole, and only really attacks when she is being attacked first. She has reoccuring nightmares of being captured and experimented on by F.A.N.T. Unlike some of the people she talks to, she refuses to talk to people like F.A.N.T or the government as she just doesn't trust the organization- only when completely trapped will she talk, usually attempting to get out of her situation while doing so. Her fighting against F.A.N.T earned her an offer to work at CHELPRO under her conditions- of which she gladly accepted, much to CHELPRO's wishes.

Zambja often creates huts out of metallic objects around her, living in them for a couple days before leaving. A non-rusted metallic hut may mean that Zambja is nearby. Zambja does not steal from other people's houses, usually respecting the property, although she will claim terrority as her own using giant Zs made of melted steel in the ground. Many places are marked with these and if Zambja comes back, she will come back to reclaim her property if someone else is living there. Like Crow and many other characters, Zambja is illiterate.

Zambja has more a cryptid reputation among her as opposed to someone like Crow who is more known as a force of a nature that takes what it wants. As such, the legend of the creature that takes away your house using the metallic mark has spread across some of the regions she's been in. While she never stays anywhere long, her kinder nature has led her to becoming friends of regions she has marked and having primitive communities built around her metallic huts or markings.

Zambja Eebra has a unusual skin condition that has a strong magnetic field emitting off from it, as well as being reinforced and toughened against hits, with most knives bending when people attempt to stab her. She can increase her magnetic field and pull and control objects almost in a telepathic way, although they must be metallic. Additionally, she can project ice and fire from her hands, projecting ice from her left hand and fire from her right hand.

Both share a dislike for F.A.N.T and have teamed up in the past to fight against them when their paths have met. They have a friendly relationship, although due to their sporadic meetings it never really gets super personal. They have a special move together called The Guided Kunais.

They're both wild women, and both tend to get along just fine and even have fought against the government together. Zambja Eebra and Crow even have a special move together called The Magnetic Slash. 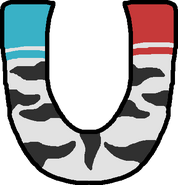