Along with Chespin, Fennekin, Froakie, and Xerneas, it was the first Generation VI Pokémon to be revealed to the public on January 8, 2013 as part of the Pokémon Direct broadcast.

Yveltal is the version mascot of Pokémon Y, appearing on the boxart.

Yveltal is a large avian-like Pokémon. Its body is dark in coloration and is adorned with grayish patterns along the underside. Yveltal's wings and tails have three points extending along the edges, close to where they meet the body. There are five large claws on each appendage, three of which curve inwards. Yveltal's underside is bright red, with branching, black markings. Similar markings are present on Yveltal's head and neck.

Yveltal has a pointed, beak-like snout. Black horns extend from above its blue eyes, with a sharply curved portion pointing forward and thinner prongs facing the rear. A feathery gray ruff encircles its neck and billows out over its back. Yveltal has small, birdlike legs with powerful talons. Like the rest of the underside, the legs are red with black adornments, and the talons are gray. Each foot has two toes facing forward and one pointing backwards. When Yveltal's wings and tail are fully extended, Yveltal resembles the English letter Y.

Yveltal has the power to absorb life energy. When it reaches the end of its lifespan, it expands its wings and steals all of the life energy of every living thing around it before transforming into a cocoon to sleep for 1,000 years. Yveltal is the only known Pokémon capable of learning the move Oblivion Wing.

Yveltal's appearance is based on an avian in the shape of the letter Y. It may be based on the giant Hræsvelgr, or "Corpse Swallower," which takes the form of an eagle and sits at the end of the world, creating wind as it flaps its wings. It may also be based on the Hawk Veðrfölnir or the unnamed eagle. According to the Poetic Edda, the unnamed eagle resided at the top of the world tree Yggdrasil, with Veðrfölnir sitting between its eyes. Yveltal may be a personification of the Black Death, possibly drawing further inspiration from the avian-like costumes worn by Plague doctors who tended to the sick. Much like Yveltal had taken the lives of countless humans and Pokémon alike 800 years ago, Human Y. pestis was responsible for the death of at least one-third of the European population between 1347 and 1353. Yveltal also likely draws inspiration from carrion birds such as crows and vultures. It may have some basis on the wyvern of European legend and folklore.

Yveltal comes from the letter Y. It may also be derived from yvel (a Middle English spelling of evil) and quetzal or talon. 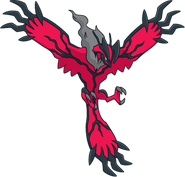 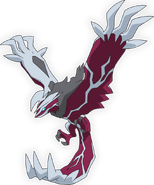