Yuuki Terumi (ユウキ＝テルミ), whose real name is Susanoo (スサノオ), was the main antagonist of the BlazBlue main games. He debuted on BlazBlue: Calamity Trigger as an NPC to then 4 years later make its playable debut on BlazBlue: Chronophantasma.

Cruel, sadistic, and selfish, Terumi delights in the suffering of others, both physically and mentally, and relishes pure chaos. He happily provokes and manipulates others for his own amusement, and ruthlessly tortures anyone who irritates him or get in his way. Unsurprisingly, this has earned him the contempt of almost every character in the BlazBlue universe, most notably Ragna, Kokonoe, and Nine. However, he is prone to enraged tantrums and panics a lot when things don’t go his way.

Despite this, Terumi’s personality serves as a foil to both Hazama and his original self, Susanoo; the former seems to favor more subtle forms of dialogue and harmless manipulation with Terumi being more blunt and open to violence (shown even more clearly when the two are separated as of Centralfiction), to the point where even Terumi himself cannot fully trust Hazama with specific duties due to the latter’s ambiguity. Meanwhile, his personality as Susanoo is more composed and focused on rage and hatred rather than the sadistic tendencies displayed as Terumi.

Yuuki Terumi returns in his Susanoo form once again as one of the game's alternate final bosses, being Non-Playable this time.

However, he, TBA, Parace, Shadow Labrys, Beelzebub and Evil Android 21 can be playable for free if all DLC characters from Season Pass 1, 2 and 3 are purchased.

Terumi appears as a Boss Unit.

He is brought back to life thanks to Ouma, who allows him to transform into Susanoo with no need of a Susanoo Unit Armor anytime he want, which can be seen when Terumi temporarilly transforms during the Ultimate Multi-Attack.

In the final chapter, he is defeated and killed again by Ragna and Sol Badguy. 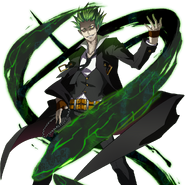 Unlimited Hazama, the result of him possessing Hazama's body.