Yu Narukami is the main protagonist of Persona 4 and its spinoffs. A transfer student, moving to the small Japanese town of Inaba to live with his uncle, Narukami gets involved in the investigation of a series of mysterious murders taking place in the town thanks to his newfound power to be able to enter a world hidden inside televisions, where innocent victims are being thrown into and being attacked by vicious creatures known as Shadows, including a Shadow of the victim themselves. Using this power, Yu lists the help of his close friends to solve the mystery behind the murders and prevent any future incident.

Although a silent protagonist in his own game, Narukami gets more development in the anime adaptation of Persona 4, where he is portrayed as a caring friend although one that does not loses the opportunity to poke fun at the situation at hand. He later appears in the interseries crossover Persona Q and its followup, showcasing similar attributes as well as being a smart leader for his group.

Narukami made an appearance in the crossover title BlazBlue: Cross Tag Battle as one of the four main protagonists of the game, alongside Ragna the Bloodedge, Hyde Kido, and Ruby Rose. Additionally, a Mii Costume based on his appearance was released as paid DLC for Super Smash Bros. Ultimate.

Yu is one of the playable characters.

Yu is one of the characters from Persona 5 Arena's side along with Joker, Skull, Panther, Fox, Queen and Aigis.

Yu returns as one of the playable characters alongside the rest of the Investigation Team.

Yu is one of the newcomers of the game, his rival is Hyde Kido from Under Night In-Birth.

Yu is one of the main protagonists of the game.

He is one of the main protagonists of the game.

Yu appears as a Master Spirit.

Yu Narukami appears as a playable character in Jake's Super Smash Bros. Like his appearance in the Persona 4 Arena duology, Yu is partnered up with his initial Persona - Izanagi - for his appearance in the game and makes heavy use of electricity in many of his attacks. Yu's Final Smash is Myriad Truths, and he additionally makes use of Swift Strike, Zio, and Cross Slash. All but one of Yu's normal recolour costumes are taken from Persona 4 Arena, with one returning from BlazBlue: Cross Tag Battle; notably, one of his costumes gives him the colour scheme of Makoto Yuki, the Persona 3 protagonists. In addition to seven basic recolours, Yu has two "special" alternate outfits: his cross-dressing appearance from the school festival of Persona 4 as well as the outfit of Feather Hawk from the in-universe television program Neo Featherman.

He appears as one of the three representatives of the Megami Tensei franchise, though is classified separate from Jack Frost as a representative of the Persona series. In addition, Yu is joined by Tohru Adachi, who appears as his "Dash Fighter" (clone).

Yu appears as a newcomer being the second Persona character to join Smash after Joker. His moveset is comprised of moves from Persona 4 Arena (Meaning unlike Joker, Yu can summoming his Persona, Izanagi, for attacking and can be damaged) while adding other types of elements from the main Persona 4/Golden game. His Final Smash is also somewhat an All-Out Attack. Unlike Joker’s All-Out Attack, it does not come directly from the source game, instead all the party members will summon their Personas to attack the trapped opponents and Yu finishes the moves off with his Ultimate Persona; Izanagi-No-Okami in which is based off of his finisher from Persona 4 Arena.

In addition, Yu also has a stage called P1-Grand Prix Arena, themed around the Arena games. The stage design features a platform in the middle, ring-like ropes, cameras, and a giant jumbotron in the middle which displays the P1-Grand Prix advertisement seen at the beginning of P4A’s story mode. A small jumbotron on the side displays various characters. The hazards of the stage are Fogs in which it will temporarily makes the Arena blurry and the Alignment cards, in which touching one would cause the floor to have different effects such as fire, ice, poison and sleep.

Most of Yu’s alternate costumes come from Persona 4 Arena alongside another palette swap based on the Persona 3 Protagonist. 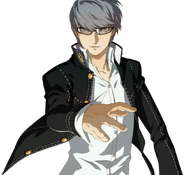 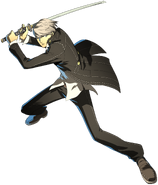 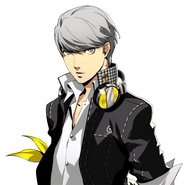 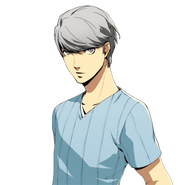 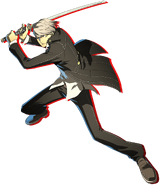