Gorge Fungi is the main protagonist in the Dark Fungi series of games. It has been confirmed he will replace Purple as the mascot of Outer Limits Co..

He is a green-teal Goru (a species of mushroom/Shroob-like aliens). He has a bergundy boil on the top of his head and a bergundy ponytail just under it. He wears a white vest-like shirt with an orange belt underneath. He wears begundy shoes with grey soles and a white spot on the front and white socks. He has purple-bergundy iris with white...whites. 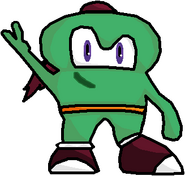