Start a Wiki
“There comes a time where every bird has to fly At some point, every rose has to die”
— The Script, "We Cry"


YoshiEgg Culmination is a game in the YoshiEgg series by Bomb Productions Games. Being a Bomb Production, please do not edit except for spelling errors. It is for the Nintendo Wii U and Hybrid Delta.

YoshiEgg Culmination features gameplay similar to its predecessors YoshiEgg & Bloop: A Crack in Time and YoshiEgg: Tilt N' Tumble; it is a 3rd person shooter/adventure game, not unlike Ratchet & Clank and/or The Legend of Zelda. The player controls a variety of characters, each with their own various stats, with an arsenal of different weapons at their disposal (classified as “Blaster” for any guns, “Melee” for any swords or other close-range weapons, and “Miscellaneous” for anything not classified as Blaster or Melee weapons). Weapons can be bought and sold at various Weapon Shops in levels and in the HUB. This game's HUB area is on Laser Tagged, specifically the Laser Tagged Mother Station, and using the various spaceships located throughout the facility gives the player access to the different levels in the game, as well as an asteroid that hosts a training station where the player can fight waves of enemies in training. Characters have Health gauges in the game's HUD, as well as ammunition if their equipped weapon requires it. Additionally, a gauge for Experience Points, a new feature in YE games.

The game begins with Rhode in a heated battle with Overman Supreme, who is assisted by lackeys Spectur, Spiryt, and Spavento, all taking place in what looks to be Final Destination. The battle is mostly represented in cutscenes, with Overman Supreme and his servants using their powerful ghostly magic and Rhode fighting back with the Slain Slayer, but the player can push a button shown on the screen when Rhode is about to attack to make him attack. When all buttons are pressed accordingly throughout the battle, Rhode leaps into the air a great height and the player is asked to press the A button rapidly, at which point the Slain Slayer charges up with glowing energy and when the A button is pressed for the final time, Rhode slices downward, cutting Overman Supreme in half. As Rhode lands to the ground, Overman Supreme lets out a piercing scream, and the souls of everyone he has reaped in the past burst out of his mouth and eyes. Then, Overman himself reduces to a purple mist, as well as his lackeys, which then disperses into the surroundings. Rhode utters the words “For justice... you have been slain”, and his Experience gauge fills up to its extent. Then, a Time Hole opens up in front of Rhode, and the player presses A to go in.

Meanwhile, YoshiEgg Nook is on Laser Tagged, nearby a familiar cave, when he spies many odd shooting stars in the sky. One very bright shooting star lands right in front of YoshiEgg, which dims and then rises up from the ground, revealing itself to actually be a Luma with pale skin, a red hat, and orange overalls. YoshiEgg waves happily at the Luma, just before the sound of three figures landing on the dusty Laser Tagged surface is heard by the duo. There had landed six Parassailants, who struck violent poses. Lumarry cowers behind YoshiEgg before YoshiEgg gives him a pat on the back, at which point the player is instructed to press the A button as Lumarry happily leaps onto YoshiEgg's head and seems to seep into his skull, granting him the power of the stars. With that, the first real, fully player-controlled battle is put into effect, where YoshiEgg's only powers are a slightly-heightened jump and a Star Spin. When the player defeats all six enemies, another cutscene is shown, where the player is instructed to press the A button as YoshiEgg and Lumarry, who popped out of YoshiEgg's head, share a high-five in celebration of their victory. However, further celebration is interrupted as another figure lands behind them with a loud thud. This figure is a Goomba with an odd Time Hole-esque crack on his face and several smaller ones on his entire being. The Goomba tries to get up, but fails and falls back down, this time unconscious. As YoshiEgg and Lumarry kneel down to his aide, the screen fades to black and the player is instructed to press the A button. 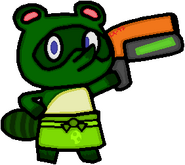 YoshiEgg's artwork for the game. 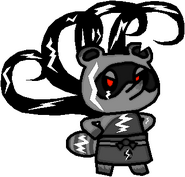 CrackedEgg's artwork for the game.
Add a photo to this gallery
Retrieved from "https://fantendo.fandom.com/wiki/YoshiEgg_Culmination?oldid=600255"
Community content is available under CC-BY-SA unless otherwise noted.