Yoob is a boss in the Mario & Luigi series, first appearing in the Nintendo DS game Mario & Luigi: Partners in Time. Yoob is a giant pink and green Yoshi that was Shroobified during the Shroob Invasion of the Mushroom Kingdom. Yoob's egg mysteriously appeared on the Yoshi's native island, and became a tourist attraction. Upon hatching, it was revealed that Yoob was created by the Shroobs to eat all Yoshis and convert them to Yoobs, hence its large appearance.

Yoob looks identical to a pink Yoshi, except it is much larger and fatter (even bigger when the Shroobs zap it), has black spines, a black shell, blue shoes, green underbelly, black irises, red pupils, and pincers.

One day, a strange egg arrives on Yoshi's Island (presumably placed on the island by the Shroobs). Although no one knows where it comes from, the egg instantly becomes a tourist attraction. For five Coins, tourists can actually witness the enormous egg close-up. However, the egg soon hatches, and Yoob is released. Since Yoob is apparently programmed by the Shroobs to eat Yoshis, it starts terrorizing the island, eating every Yoshi in sight. The remaining Yoshis flee to safety.

When the four Mario brothers (Mario, Luigi, Baby Mario and Baby Luigi) first arrive on Yoshi's Island, the place is deserted. Most of the Yoshis have already been eaten. The few survivors are hiding in a small tree hut. Soon, Yoob discovers the Yoshi hideout. The Yoshis attempt to flee, but Yoob eats all of them, even Yoshi. The Mario brothers survive the attack. With no more Yoshis left in the area, Yoob leaves to search for more food.

The Mario Bros. see Kamek, who says Baby Bowser is on top of the cliff and flees, taking some Yoshi cookies with him. The bros. chase him and eventually find Prince Bowser. The babies eat his cookies, so he eats the shards he stole from the bros. and runs away. The bros. chase him and start trying to get the shards out of him when two Shroob UFOs appear. They fly off to Yoob, who is climbing the outside of the cliff, and zap him with a ray, which makes him huge, then fly away. He then proceeds to eat Baby Bowser and the bros.

Once inside Yoob's Belly, the brothers discover that Yoob does not have a normal digestive system. In fact, part of Yoob's Belly is an egg factory, created by the Shroobs. The factory has Yoshis that get trapped in Yoob Eggs on a conveyor belt which takes them to Sunnycide. After Yoob eats a Yoshi, the RC Shroobers in his belly handle the Yoshi. Then, the Yoshi is encased in a pink and green egg, similar to the one Yoob emerged from. This would presumably have turned the Yoshis into monsters, destroying the kingdom. However, the eggs are fragile and Mario and Luigi can destroy them with their attacks and free the Yoshis, as shown in the boss battle.

Soon, the four Mario brothers put an end to the operation. To do so, the brothers aid a group of Yoshis (led by Yoshi himself) in their efforts to escape Yoob's body. By using Chomp Rocks that Yoob had eaten, the Yoshis manages to push the rolling stones through Yoob's intestines, creating a pathway for the Mario brothers to the heart of the internal factory. In the center of Yoob's stomach, the Mario brothers encounter the guardian of the Yoob eggs, Sunnycide. Sunnycide guarded the exit, preventing the bros., Toadbert and the Yoshis from escaping, forcing the bros. to fight. After a long battle, the brothers defeat Sunnycide, and, with the help of a Toad named Toadbert, free the remaining trapped Yoshis. Escaping through Yoob's digestive tract, the Mario Bros. and the Baby Mario Bros., Yoshis, Toadbert (and even Baby Bowser) made it back safely to Yoshi's Island. Yoob, who needs the energy provided by the Yoob eggs to remain operational, falls asleep. All the captured Yoshis are saved before they turned into monsters.

If Mario and Luigi return to Yoshi's Island, they can find Yoob's now-deactivated body attached to the side of a cliff. In fact, the Mario brothers can actually reenter Yoob's body to find items, badges, and beans the heroes may have missed during their first time through.

Mario & Luigi: Return of the Shroobs

Despite having been deactivated after the events of Partners in Time, Yoob reappears in Mario & Luigi: Return of the Shroobs as the boss of Yoshi Tower. At the end of the game, he is reverted back into a pink Yoshi.

Yoob makes an appearance as a giant boss in Mario and Luigi: Paper Combine. His role in the story is currently unknown.

A smaller version of Yoob makes an appearance as a playable character in Mario Rugby League. He is a member of the Yoshi Eggs team in the game, alongside Yoshi, Birdo, and other notable members of the Yoshi species.

While Yoob himself doesn't make an appearance, Chapter One reveals that all Yoshis have either been enslaved or transformed into Yoobs, implying that Yoob may be a species instead of just a singular character.

Yoob appears in this title as a boss. Not much about his appearance in this game is known. 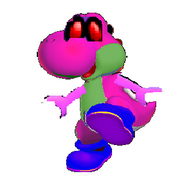 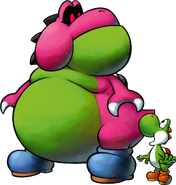 Baby Yoob hatching from an egg
Add a photo to this gallery
Retrieved from "https://fantendo.fandom.com/wiki/Yoob?oldid=3150494"
Community content is available under CC-BY-SA unless otherwise noted.