Yggdrasil is a character appearing in the Doom Dome Battle series, first appearing as a boss in the first installment before being upgraded to a playable character in the second. She appears as a supporting character in Rokukai's Demon Bounty and is playable again in Warriors of Babylon. She is the creator of the Garden of Eden, Gilgamesh, and mother of Seben.

Yggdrasil is a long range character who fights with a whip. She can bind people in her whip and pull them closer for combos or rather throw them away. She can make quick slashes with it, floor sweep people and whip in all directions. In some combos she disconnects the halo on her whip which then acts like a boomerang.

Her Doom Attack is Tree of Life. Yggdrasil flies up in the sky and throws her whip into the ground, near the opponent. Out of it sprouts a giant tree which envelops the opponent damaging in the process. If they are KO'd in the Doom Attack the tree disappears and a sucked dry body remains on the floor.

Like many, Yggdrasil was an angel created by the Higher Intelligence, and one of the first female angels to be created alongside Abaddon. While her sister was the angel of death, she was the angel of life. She was created to cultivate the Earth with flora and fauna, and is the designer of the Garden of Eden. The first tree she placed in Eden was its centerpiece which she named Yggdrasil, after herself, which would grow powerful fruits, called Mana, too powerful for a human isn't supposed to consume. She would mainly oversee the environment of the Earth, but only could do so much when humans started changing her creation so drastically. During her time in the Heavens she gave birth to a son, Seben, with another angel but raised him alone.

Yggdrasil appears late in the story, being one of the lasts bosses to be fought. She manages to break through the dome barrier and lands on the ground where she encounters Tyrant and Maria Justice. She makes Maria crash herself which triggers Tyrant to fight her. She however manages to escape when Tyrant flees to the Gates of Hell.

She later appears next to Amaya and the others, checking to see if Amaya is safe and is surprised of what she is capable of nowdays.

Yggdrasil is ugraded to a playable character in Doom Dome Battle 2, being a high school teacher on the school of Joshua, Amaya, Prince, Mai and Violet.

Yggdrasil is a major character who appears in Rokukai's Demon Bounty. She first appears in the endings of all three levels of the third stage. She appears to take Rokukai to either Heaven Gardens or Heaven Prison. In the Heaven Prison level she locks Rokukai up but he gets freed by Judas and has the option to fight Yggdrasil, Judas or simply escape. When Yggdrasil gets defeated she alerts Michael of what's happening which may lead to the war btween the Heavens and the Underworld.

In the Heaven Gardens level she requests his help to defeat Stolas on the Three of Life. Rokukai can help her do that or he can find and defeat Judas or even flee. When defeating Judas in the levels she comes and allowes her son Seben to go with Rokukai on adventure. When having all the information about Judas in the Heaven Temple level she sends them on a mission to go to the Moonrose Coven. Otherwise when only defeating Stolas Seben is still allowed to join Rokukai.

She makes a second appearance on the Stage 6 level: Infernal Planes where she also is on the side of Michael's army in the war between the Heavens and the Underworld. When Michael is defeated Yggdrasil comes to pick up her son and has to execute him for killing Michael.

She also appears in the true ending, helping Seben and Rokukai get inside of Aries' lair. She is seen watching them go off into the distance along with other characters.

While she was not invited, Yggdrasil went to the Hanging Gardens of Babylon after discovering Raphael took Amaya there, to get her back. She could easily get in because the place was originally the Garden of Eden, something she created, thus the barrier held nothing against her. She also discovered Joshua and Violet where there and was determined to bring them all back as fast as possible.

As she appears in Warriors of Babylon 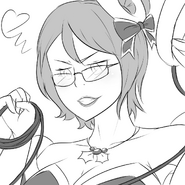 Add a photo to this gallery
Retrieved from "https://fantendo.fandom.com/wiki/Yggdrasil_(character)?oldid=2581392"
Community content is available under CC-BY-SA unless otherwise noted.