Yellow Toad, sometimes referred to as Ala-Gold or Wolley, one of many kinds of Toads in the Mario series of video games. He (alongside several other colored Toads) first appeared in Super Mario Sunshine as assistants to Mario, and since then he has appeared in the New Super Mario Bros. games as his ally, together with Luigi and his older brother, Blue Toad. Yellow Toad is very similar to his friend, Luigi.

Captain Toad's Toad Brigade includes a Yellow Toad, but it is unknown if this is the same Yellow Toad in the New Super Mario Bros. series or another one of the same color.

While he is rather childish like most Toads, the New Super Mario Bros. games depict him Yellow Toad as a noble, brave defender of the Mushroom Kingdom; in fact, he even went as far as joining the Mario Bros. to help them fight Bowser, Bowser Jr., and the Koopalings. He is overall quite cheerful and positive, but he can also be sassy, as seen in Mario Party: Island Tour.

Super Mario and the Ludu Tree

Yellow Toad is the third main character in Super Mario and the Ludu Tree and has to save peach. In this game he will also have some new features, such as different powerups, different styles of outfits etc.

Yellow Toad appears in Super Mario Moose as a playable character, where he helps Mario save Peach and the moose from Bowser.

Yellow Toad appears again in the deluxe version/sequel to Super Mario Moose, where he is once again a playable character.

Yellow Toad is one of the co-hosts in Splatoon x Mario Party. He needs help finding Toadette like the rest of the Toad Brigade.

Yellow Toad appears as a costume for Toad. When selecting the character hold down the left control stick downwards to turn Toad into Yellow Toad. 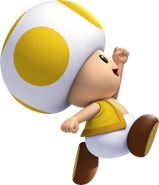 High quality render of Ala-Gold as he appears in Super Mario Run
Add a photo to this gallery
Retrieved from "https://fantendo.fandom.com/wiki/Yellow_Toad?oldid=3200037"
Community content is available under CC-BY-SA unless otherwise noted.