Yellow Pikmin are the second variety of Pikmin encountered in most Pikmin series games. They are resistant to electricity, and can be thrown higher than other Pikmin due to their protruding ears.

Their appearance is similar to the average Pikmin, save for their yellow skin and ears. It us unknown if these large ears aid in their hearing, although seems to contribute to their ability to be thrown higher into the air.

Yellow Pikmin are pretty much the standard Pikmin in terms of carrying and health, but can be thrown further than other Pikmin and are resistant to electricity. They also are the fastest diggers in Pikmin 3. In Pikmin: Ultrahunt, they are invaluable as they can go through electrical fields.

Yellow Pikmin make a fairly prominent appearance in Jake's Super Smash Bros. While not playable on their own, Olimar commands Yellow Pikmin alongside a number of different Pikmin types.

Yellow Pikmin are the fourth type of Pikmin you will find in Pikmin: Ultrahunt. They can be shot further than other Pikmin on account for their large yellow ears. They have average attack power and are immune to electricity, allowing them to be shot through electrical fields or attack enemies with electrical skin. Since Hestia lacks a working whistle, Yellow Pikmin either need to be vacuumed off a foe they're attacking or gathered after the foe goes down. They can be used multiple times because of this. 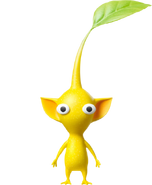 Yellow Pikmin with full bloom flower
Add a photo to this gallery
Retrieved from "https://fantendo.fandom.com/wiki/Yellow_Pikmin?oldid=3200062"
Community content is available under CC-BY-SA unless otherwise noted.