Fantendo - Game Ideas & More
Register
Don't have an account?
Sign In
Advertisement
in: Tigzon's stuff, Free to use Characters, Articles under Construction,
and 12 more

Yami Zu is a character in the Tigzon series and Noora Natsumi’s childhood friend since elementary school. Her transformation is a human-cat hybrid, Meko, highly skilled for acrobatic and her super-strength.

Yami Zu is a young, slim teenage girl with a short height, fair skin, pinkish eyes, brunette hair with two ponytails and a fang on her mouth. Her standard attire is consists of a big, Orange turtleneck-collar hoodie with oversized long sleeves, black shorts, and huge orange shoes with a star design covered with a huge pair of orange socks.

Yami Zu is a young, bubbly girl who was recruited by Dr. Matin Maximum, as part (alongside with Eden “Ed” Euroki, Sipher Sore, Rayto Rasar, and Antar Citar). An excitable at nature, her personality appears to be very childish at times and act as rather silly and goofy. Her favourite hobbies are watching kaiju movies and playing toys, even at her age of 17. She is a childhood friend of Noora Natsumi and has a strong love interest on her, making her more of a lesbian character.

During her past, she was being ill-treated by some kids during elementary school, only to be pushed out by 5-year old Noora Natsumi, who at the time, was adopted by a former ANTIX Corporation’s scientist, Roki Kazwani. She becomes friends with Noora and gradually sticks with her as she wishes her to make Noora happy.

Yami Zu is one of the five Zon Coders, recruited by Dr. Matin Maximum, who has an ability to transform into a Zonantix named Meko. When transformed, she highly acquires with techniques of acrobatics and incredible strengths.

Yami first appeared as the main boss in Tigzon. She was recruited by Dr. Matin Maximum as one of the five Zon Coders (alongside with Noora Natsumi, Eden “Ed” Euroki, Sipher Sore, Rayto Rasar, and Antar Citar) to take down the ancient power known as Zon Code and used them as their controlled weapons. She (alongside with Meko) appears in the DLC, known as “The Nightless Story” where her backstory was mentioned 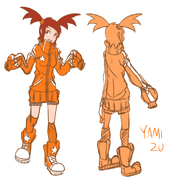 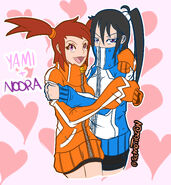 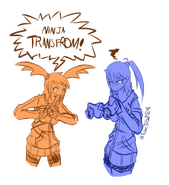 Yami and Noora swapped clothes each other?!

The Tigzon Girls (with actual names and 8-Bit icons) 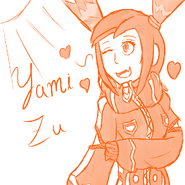 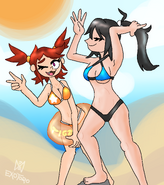