YE is a character that was originally supposed to be part of Project Fate as a reboot of YoshiEgg Nook, however the project was canned. About a year or so later, it was announced that he would appear in Fantendo - Genesis in a post credits scene in Fantendo Smash Bros. Shattered. In Fantendo - Genesis, it appears that he seems to live in a alternate reality close to the Fantendoverse where the world seems to have ended with the survivors being in the single digits.

He is mute and tends to communicate with his hand gestures and body language. He is notably a bit more feral than his predecessor, often seen on all four limbs. He acts a bit like a scavenger as well, likely behavior taught in his home reality. He is able to grasp concepts easily due to how his brain is programmed and seems to have a fairly coherent understanding of what is going on at any given moment, if not right away.

YE lives in a separate universe away from the main Fantendoverse but during the events of Fantendo - Genesis he was teleported here along with Overman's portal device. In his home reality, the world seems to have ended for the most part, give or take a few survivors. Overman Corp, an evil organization, is set out on rebuilding reality in their image.

He helped Rachel (Exotoro), Robyn Sephora, and Unten escape the military base after being tossed through an interdimensional portal created by Overman Corp. He follows the group along until Unten defeats Six, in which he attempts to get back to his home dimension to stop Overman. This results in him landing in The Wasteland where he meets the The Wasteland Warriors. He sees them as a threat until they tell him otherwise and decide to help him come home.

YE is an overall friendly character who cares about others very much. He tries to help in any way possible and in any situation. Although he is mute, he is very expressive. He takes his friendships very seriously, even if they were forged only hours before hand. He acts a bit like a scavenger as well, likely behavior taught in his home reality.

Would have appeared in this project had it not been canceled.

Appears in the last Post Credits scene where it states he will return in Fantendo - Genesis.

Fantendo - Genesis states he will be in this game. The extent of his role is unknown. 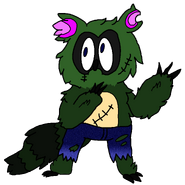 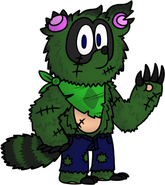 YE as he would have appeared in Fantendo: Onward, by YoshiEgg.

YE using the Jetpack in Project Fate. Art by YoshiEgg.

Concept art by YoshiEgg (t∣b∣c). Features YE... with a gun and claws.
Community content is available under CC-BY-SA unless otherwise noted.
Advertisement