Xsomnis (pronounced: ZOM-niss) is a playable character in the Draco Duel series. Xsomnis is considered to be the main antagonist of the first two games, particularly in Draco Duel 2 where she is the main antagonist of the game's story mode, A Rift in Time. Xsomnis is a being born from nightmares and evil thoughts, and she gains her power from the pain and suffering of others.

In her humanoid form, Xsomnis takes the form of a young woman, who wears dark purple and blue plated body armor with a helmet that resembles the head of her dragon form, with pink crystal horns, as well as an eye mask and a light blue cape. Xsomnis's humanoid form's main weapon is a long magenta and red scythe called the Scythe of Souls, which she uses to extract the nightmares from her victims.

In her dragon form, Xsomnis is a predominantly purple wyvern with dark blue scales, and light blue tattered wings. On the end of her tail, Xsomnis wields two smaller Scythes of Souls which function similarly by draining nightmares from the victim.

Xsomnis is a maniacal, power-hungry and twisted being whose only goal is to break free from the Ethereal Realm, which she has been trapped in, and take over Arcania - although she wants to rule it, she does not care about destroying it and everyone within it in the process, as it is merely one world in an endless universe that she could control.

Since she becomes stronger from the suffering and dark thoughts of others, Xsomnis is always satisfied when her opponent is in pain, as it only makes her more powerful. Even her own suffering strengthens her, as she becomes significantly more powerful when on low health.

Xsomnis does not let anyone get in her way from achieving her goal of controlling Arcania by obliterating it in the process. She even casts aside and attempts to kill her henchmen upon realising they are one of the only threats who could potentially stop her from achieving her goal. She also resents Lumino for this very reason and is brutal enough to try and kill him by throwing him into the sun.

Xsomnis has access to a range of attacks while in her dragon form:

Xsomnis has existed within the Ethereal Realm for as long as Arcania has existed, however she was not able to leave it until King Yucatan, the last monarch of Arcania, opened an Ethereal Rift in an attempt to ward off the rebels who were threatening his rule. This however led to a greater problem than the war that was already being fought against the royals and led to the Ethereal Crisis, where Xsomnis destroyed large amounts of the continent.

It wasn't until The Hero was able to trap her back inside the Ethereal Realm that her rampage of destruction ended. Although The Hero lost his life in the process, this meant that Xsomnis would be trapped forever within her Ethereal Realm, secured by six Ethereal Hearts, hopefully to never threaten Arcania again.

At some point between the Ethereal Crisis and the events of Draco Duel, Dimentra, Selesté, Ozara and Frostspark accidentally destroy one of the Ethereal Hearts holding Xsomnis within the Ethereal Realm. This weakens the force keeping her trapped within, thus allowing her to slowly escape by creating a small, but continuously growing rift in Arcania City that goes undetected for many years.

Xsomnis makes her first playable appearance in Draco Duel. However, the playable character of Xsomnis in this game is not actually Xsomnis, but rather a clone projected by her into Arcania as she was still bound within the Ethereal Realm during this game's events.

In the game's story mode, A Rift in Time, Xsomnis manages to let more and more of her power out of the Ethereal Rift, which lets her create an army of Ethereal monsters to fight on her behalf while the rift continues to grow, eventually, she hopes, it will let her escape as well. Xsomnis also enlists the help of Slyza, Wywyrm and Valance to help her escape her prison, promising them a fair share of power once she takes over Arcania.

For the first half of the story, Xsomnis is seen very little, only being seen as a shadow inside the Ethereal Realm commanding her underlings to kill Lumino, the one Draconid in Arcania she sees as a threat due to his relation to The Hero who trapped her one thousand years ago.

She is not encountered by the player until Chapter 5, where she wins a fight against Lumino and Dimentra and expels them both from the Ethereal Realm afterwards. As her power continues to grow with the rift ever-expanding, she eventually breaks free at the start of Chapter 7, causing mass chaos and destruction in Arcania City.

During this time, she casts aside her henchmen and attempts to kill them, but due to Dimentra's intervention, they are saved. Not worried by this, she turns her attention to Lumino and tries to kill him by throwing him into the sun, but Lumino is able to use the Ethereal Essence from the Ethereal Hearts to unleash his Ethereal Finale on Xsomnis, blasting her into the sun where she disintegrates.

While Xsomnis's physical form in Arcania was most definitely destroyed, it is unknown whether she subsequently regenerated inside the Ethereal Realm.

Xsomnis appears as a Boss and Spirit in Fantendo Smash Bros. Combat (erictom333). Her Spirit battle is represented by Dragon Queen as her puppet fighter.

While Xsomnis does not actually appear in KillGames, she is referenced in one of Zmei's alternate costumes, which is based off her design. This costume is called the Nightmaric Costume which is also a reference to Xsomnis. 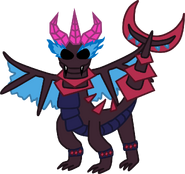 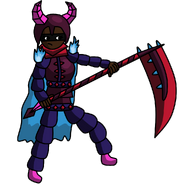 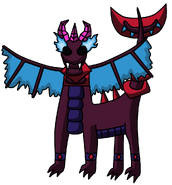