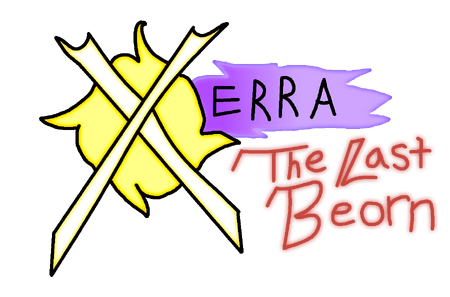 Xerra: The Last Beorn - Volume 2 is the second volume of the Fantendo - Drive series Xerra: The Last Beorn. Volume 2 was released in 2015 and contuines the series where it left off, with Xerra and the others stepping into the Earth Portal. It features the last arc. Volume 2 consists of the last couple of issues (no set number). The comic is weekly.

Xerra's group lands on the other side of the portal. As they adjust to the new light, they find that Earth has become a wasteland. As Xerra walks away from Earth's Yggdrasil, she sees giant crystal men with black worms inside of their bodies. Xerra asks what the hell happened to Earth as she continues to walk forward, cursing Unten for destroying yet another planet.

Eakin states that Unten is long dead. Xerra asks what he means, as Earth is destroyed just like Zeon. Eakin finally discharges the information he found in Issue 12, stating that Xerra was in cyrosleep for hundreds if not thousands of years. He then pulls out articles stating that The Threat was defeated by Unten. Xerra discovers that Unten isn't to blame for the destruction... but who is?

Xerra, Hodges, Red Eyes, Feath, and Eakin are suddenly grabbed by the giant crystal men and are shoved into a throne room. Standing on the throne is a man made of black shadowy material, introducing himself as "The King of Twilight" and the crystal men as his "KRST Nightmare Slaves". Xerra asks him what happened to Earth, with the King of Twilight saying he had nothing to do with it; he just saw that Earth was empty and took it for his own with the permission of the Higher Council.

Xerra asks who this "Higher Council" may be, and the King of Twilight points to the sky, where they see a bunch of green haired mecha robots flying in the skies with staffs.

The light killed everything, Xerra. The light...

Xerra and the others are grabbed by the KRST Nightmare Slaves, with Xerra unsure of what will happen next.

Xerra and the four other characters are taken to the Higher Council, a ship floating directly above Earth, where the see what was formerly a woman sitting in a chair, her body deformed into a spider-like state. The former woman talks to them, saying that their organic, free thinking bodies will need to be re-educated to keep the universe in balance. Xerra breaks out of her hold, destroying the KRST Nightmare Slaves, freeing two of the Nightmare Worms inside, which both go inside the woman's head. The ship collapses and Xerra and the others scramble out onto the sandy wasteland landscape. They see a robot drop out, which is revealed to be UNT3N.

UNT3N tells them that he had been floating in space for centuries, fueled by his hatred for Unten while Fanti could barely hold him restrained. He also tells them that the fall made Fanti reboot and attempts to kill Xerra before Fanti can stop him, slamming, Hodges and Red Eyes out of the way before tackling Xerra. UNT3N holds a claw towards Xerra's face, telling her that he's going to tear it off. Suddenly, Fanti kicks in and hits UNT3N with two of his free arms. UNT3N falls over, allowing the group to escape but not for long as two green haired mecha robots fly close to them.

The mecha robots take Xerra and the others into a brain-washing facility where they are strapped onto a conveyor belt that will send them through brainwashing chambers. Xerra manages to bite off her locks at the cost of some of her teeth, which she believes will grow back. As she attempts to free the others, Feath sacrifices himself by going into the brainwashing chambers to give Xerra time to focus on the others.

Mortified at the lost of Feath, Xerra tears up the brain-washing facility in anger and begins to break down in tears and begins to become angry at Unten for not saving Earth or defeating that former-woman-turned-spider-woman. She burns frustration at being unable to stop her in the past and now in the present, she would need some kind of miracle to stop her.

Xerra leaves the facility with the others as she heads down what's left of a forest, intending to hide away from the evil forces.

Issue 16: Xerra Hungers for the Pine!

Distraught by Feath's "death", Xerra heads into the forest running as she knows it won't be long before she'll be taken up again. As she runs, the group insists on taking a break, insisting that surely they must have lost them by now. She finally agrees to a break in a heavily forested area but refuses to speak as she looks solemnly at the pine trees, reminded of Feath's sacrifice and general memories of him.

Two green haired robots suddenly corner Xerra and her group, managing to capture them again. Xerra angrily gets out of their grip as they take off into the sky, absolutely furious now. Suddenly, the pine trees reveal their mechanical natures as more pop out from the ground and shoot at Xerra with stun darts. An stun dart goes straight through her chest but her adrenaline keeps her running in the now expanding forest.

As she is pierced with more and more stun darts, she fiercely continues. She no longer has anything to fight for but she keeps going, looking more and more ill as the stun darts pierce her. Her eyes are still wide, filled with rage and terror. She finds a gas tank half empty and pours it on her as the darts continue to fire at her. She finally falls to the ground as she empties the gas tank and falls into a deep sleep.

Issue 17: Xerra Has A Lot of Visions! 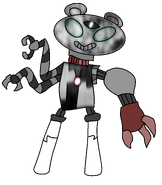 UNT3N
Add a photo to this gallery
Retrieved from "https://fantendo.fandom.com/wiki/Xerra:_The_Last_Beorn/Volume_2?oldid=2075595"
Community content is available under CC-BY-SA unless otherwise noted.