Fantendo - Game Ideas & More
Register
Don't have an account?
Sign In
Advertisement
in: What is the New Fantendoverse?, Females, Beorns,
and 12 more

Xerra is a female Beorn that first appeared in the Fantendo - Drive series called Xerra: The Last Beorn, which she is stranded on a tundra like planet and comes under the impression she is the last of the Beorns. Her escape pod flew out to a far off planet is mostly populated by robots and ascended beings that are immortal in nature.

As revealed at the end of volume 1 of her own series, she was actually in stasis for a very long time; upwards to millions of years. When she landed, she wasn't just far from home: she was stranded in the future. Eakin, a Time Keeper, was able to send her to the past to attempt to prevent the horrible future from occurring, which was a timeline known as Future's Dark. Teaming up with Umbra Shader and saving Rose Reaper and DREW from being killed by Two, it's quite possible that Xerra has prevented this bad future from coming to pass.

After this, Xerra was not sure what to do in her new time that was vastly unfamilar to her. She ended up camping out in a house that would later be legally owned by Pinku Rozen and was previously owned by Rei Carnation, leading the three to form the cast of Pink Lemonade.

Xerra was one of the many Beorns that were able to escape Zeon's destruction, however her course was sent out of whack by Unten Bluzen's escape pod, causing her to propel towards uncharted space for a unspecified period of time. She finally woke up in a gaezbo of a unknown planet, where she met Red Eyes and Hodges.

In actuality, that unspecified period of time ended up being decades, centuries, or even possibly millions of years into the future. When she had arrived, the events of Future's Dark had played out with Palutena beginning conquest of the New Fantendoverse to ensure safety for everyone. During a battle with the future Unten, Palutena was transformed into a spider-like creature and went even more insane attempting to transform back. When Xerra had landed, Palutena had not only won, but the entire universe was dying from neglect and a lack of any kind of balance.

Xerra is rough and rude to unfamiliar people and strangers, and can act extremely aggressive towards people she perceives as enemies. She, however, can be a lot softer with people she has gotten to know. She has violent thoughts and feelings deep inside her towards Unten and her own perceived failings, murdering them in dream sequences. She was not able to reconcile these until much later on.

Despite her rough exterior, Xerra has a knack for mechanics, similar to that of Doomulus Grime. Additionally, Xerra is a quick thinking problem solver and has strong resolve, as proven by her experiences with the various villains of her mini-series. Additionally, she feels very strongly about attempting to right the wrongs of the past and preventing bad things from happening that will have long-standing effects. If it came down to it, she would kill to preserve peace in the current timeline.

Xerra is not interested in romance or sex, although she does form very strong friendships with the people that she gets to know. She isn't against hugs but kisses are something she finds really unappealing and gross. Xerra tends to get herself injured quite a bit, similar to Unten Bluzen. She is also able to get rather violently ill a couple of different times across her adventures, although has been able to stave off her own death multiple times.

In Pink Lemonade, Xerra was shown to be somewhat ambivalent towards things she didn't care about, often sarcastically remarking at things concerning relationships. She also has been attempting to do a better job at keeping her emotions in check, similar to how she acted around Hodges and Red Eyes.

Xerra was based off the idea that there could be Beorns out there, who believe they are the last of their kind, which was explored in a comment by Somarinoa (t∣b∣c):

“Yes, but it's also like saying "All Saiyans or Kryptonians are dead" but keep having characters of these species show up despite someone being the "last". Chances are the devastation means they won't see another of their kind for a long time, and they may very well come to believe that they are the only one(s) left. When in reality, it would be virtually impossible to actually tell if someone was the last of anything, and "the last of the ____s" is not necessarily entirely accurate and can be used as a simple terminology at times.

It is also possible that nobody still alive knows any of the other survivors are, thereby making them all the last of the species as far as anybody can tell. For the same reason that just because you find only one bird from a species left and declare it "the last" there might be another out there, SOMEWHERE. No way to actually tell. ”
— Somarinoa on Origin's page, in response to criticism that Unten was no longer "the last Beorn".

Xerra's design is based off Unten's original look in Fissure (2014), although much more scuffed up and featuring a bag by her side. Despite the comparsions, Xerra retains very few of Unten's character traits.

Interestingly, Xerra shows few, if any powers or abilities. She may be one of the few Beorns born without any kind of powers at all. She was able to visit Tennu in dreams, although it is somewhat ambiguous as to whether this was the true Tennu at all. She has a survivor's wit and endurance which kept her alive against various threats. If she has any powers, it would likely be Aura powers, which she has yet to tap into.

In Fantendo Smash Bros. Victory, she has a lantern and a glowing scimitar in her artwork, suggesting she uses those as weapons. In Pink Lemonade, she instead utilizes a giant axe.

Xerra under the effects of the Human Beam 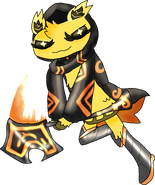 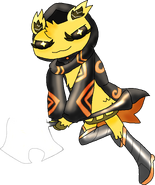