Start a Wiki
NOTE: This is a fangame made by Ninkancho. Please don't make major edits without permission. Leave feedback in the comment section!
This page is related to the XenoDisplay. It is an April Fools' prank and was created as a joke.

The XenoDisplay (stylized xenodisplay) was an extended April Fools' Day hoax created by Ninkancho to appear to be their new console. It was announced on April 1, 2017, when it was also claimed that all sales of the predecessor, the Display, would end immediately. The hoax had an emphasis on on-the-go fitness, with the system being meant to "[b]ring health to gaming". It was named for its ability to consistently interface with the player in ways alien to the current gaming landscape, as well as for abbreviating to the infamous emoticon XD.

On April 2, it was confirmed that the XenoDisplay was a hoax, but the prank was extended with new fake titles being announced regularly throughout the rest of the weekend.

The XenoDisplay is similar in design to the original Display, albeit slightly thinner. However, the controls are separated into four interlocking XenoDisplay Panels that slide into the sides of the XenoDisplay Console, like the Nintendo Switch Joy-Con, but with two per side. The panels can be used four-per-player, two-per-player (again emulating the Joy-Con), or one-per-player for instant four-player fun, with enough buttons in any configuration. 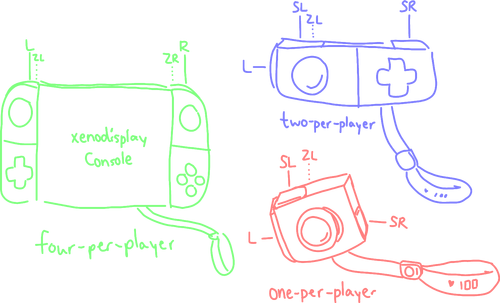 As can be seen in the above diagram, the Console and each Panel contains a special extensible wrist strap that mainly serves as a heart rate monitor, with other health-related functions. The wrist strap can be stored within its Console or Panel when not in use, much like the reel of a tape measure. There is a button on the wrist strap that may be used to cycle through its interface.

This ties back into the XenoDisplay's theme of health; the system would log user activity and heart rate regularly and ask for statistics such as weight and Calorie intake, then create a health plan based on this data.

Each XenoDisplay Panel has a three-axis gyroscope and accelerometer, a wrist strap, and one main stick or button array as well as other analog shoulders and triggers that may only be revealed depending on whether the Panels are separated. They can click into the adjacent Panels and XenoDisplay Console.

The XenoDisplay uses most of the Display's features, retooled to fit the new health-based paradigm. For instance, Play Coins are awarded for other forms of activity than the pedometer, interfacing with the wrist strap's Calorie, distance, floor-climbing, sleep time, heart rate, etc. detectors. Another example of this retooling is that Muffin serves more as a fitness coach than a personal assistant.

The new features were said to have very practical usage. Geopositioning allows the XenoDisplay to detect when a user is near a restaurant; at this point, its menu and nutritional facts are fetched, and the system will give a list of potential healthy orders. The XenoDisplay is also equipped to call 911 in case of detecting serious medical emergencies such as heart attacks.

Local multiplayer and TV connection is still routed through the original Display Box.

ninkancho
Retrieved from "https://fantendo.fandom.com/wiki/XenoDisplay?oldid=3265195"
Community content is available under CC-BY-SA unless otherwise noted.