Wurm is The Quaznic Fantendoverse version of Unten. He is one of several "Wurms", although he is generally seen as the most pathetic of them all by Köing, king of the Beorn Race and commander of Starship Zeon.

Wurm has bleached white fur and a black underbelly and black coated hands. He has several piercings across his face, three around each eye and two on his ears. He has star shaped pupils. He wears a purple and black colored scarf given to him by Sia, and wears it off duty.

Even more disgraced than the New Fantendoverse Unten, Wurm never even had a shot of becoming a hero. Boare kept him far away from any kind of chance to usurp and upstage him, even bleaching his fur white to prevent Wurm from ever realizing his potential. Wurm is seen as pathetic by everyone on Starship Zeon and even though he lives in a very socially toxic enviroment, he does have kindly qualities that people find off putting on Starship Zeon and even a little bit for The Radali. He is overworked and is constantly breaking down, but he always, always gets up and is willing to fight one more time. One more day.

He has various phobias born out of the trauma he has experienced over the years, his greatest phobias being specifically designed by Köing to be even more humiliating to him. He is afraid of, in no specific order, the following:

He is sometimes known as the "Broken Bird" Unten among Heralds like Zellen Harley Quimbleson.

Born on Starship Zeon, Unten was carefully noted to be the hero that The Gypsy spoke of. Köing feared he would upsurp him and cast him as far as way as he could without keeping him out of his sight, eventually humiliating him over and over. It does secretly pain Köing to do this, but he knows he must do this to make sure Unten never ever overtakes him and starts a revolution on Starship Zeon.

Now known as Wurm, Wurm is one of several "Wurms" that exist on Startship Zeon to do menial tasks and take blame for executive decisions.

Despite being so pathetic, Wurm does have the Descension ability, however he was lied to by Köing who told him he didn't have it. He has no electrical elemental powers, instead equipped with two shoddy tasers that actually hurt him more to use than it does to the person being tazed. 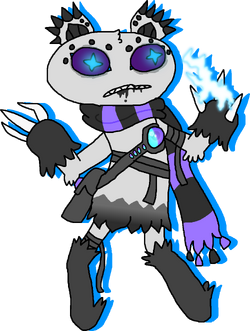 Wurm appears with a Hyper Mode in Fantendoverse X: Space, being the debut of this form. As mentioned in the past, Wurm's Hyper Mode Orb is actually the same as Unten's, and would have to be shared if Wurm were to travel to the New Fantendoverse, as currently the whereabouts about Wurm's Hyper Orb in The Quaznic Fantendoverse are unknown. Wurm, being one of the weakest characters in his universe in his normal state, gains a serious power boost, of which this power is even more intoxicating and addictive to Wurm than it was to Unten. Wurm almost undergoes a complete personality shift in this form, obsessing over the Hyper Mode Orb and protecting it all to himself.

Since he has no weapons beyond his tasers, Wurm actually gains the ability to generate electricity between his claws to a absolutely killer voltage, as well as being able to climb just about every surface with said claws. It is implied that since Wurm has been talked down so much by Koing, he actually has the potential to be even more powerful in his Hyper Mode form than Unten if he become more confident in his base form.

Has a big crush on her and is why he left Starship Zeon to join The Raduli. It is unknown if she likes him back. The two have a somewhat friendly relation ship and Rachel has nicknamed him "Oreo" because he looks like one.

Wurm in Fantendoverse X
Add a photo to this gallery

Retrieved from "https://fantendo.fandom.com/wiki/Wurm?oldid=3211000"
Community content is available under CC-BY-SA unless otherwise noted.