The main character of World of Animals, mink, and former Royal Guard. Players are able to select their gender and name at the start of the game.

Simone is the son/daughter to Beraxis, Noble of Education among the Shepherds. Thanks to her, Simone's been able to have an easier time getting into an academy, where they learned how to wield the longsword, which'd eventually lead them to becoming a Royal Guard. Unfortunately, it was around this time that Julin, Noble of Technology, had introduced the invention of guns into the Royal Guard. They were billed as the superior weapon, so it was either learn the gun or get kicked out. And unfortunately, Beraxis' influence wouldn't let them into gun training this time, them requiring exhuberent money (though Julin's confidants seemed to have an easy time getting into training). So, Simone's guard position would be overtaken by the new guard, and for reasons they hadn't disclosed at the beginning of the game, they were later out on the street, though it's implied their training exclusivity in sword practice might've had a hand in that.

At the beginning of the game, they've been spotted stealing silverware from wealthy couple Mr. and Mrs. Buhemon. And when they were spotted, it was either go to prison, or work for them personally. And so, Simone was forced to degrade themselves so that they accept their work. And there, they would meet Camiko. After working with him to try and reclaim some ill-gotten jewelry from thieves, he decided to work with the rats in order to rise up against the Buhemons and finally escape.

From there, the duo set out into the city of Rusal, and Camiko promised to lead him to his hometown, Shuruo, in order to find them a job. However, the city near said town, Seimester, was attacked by a monster of legend, forcing those around the city to be evacuated while the Shepherds attempted to stave off the monster. The refugees were evacuated to Rusal, where they'd be seated at the church in the middle of the city. Camiko decided to station himself at this church to find his family, Simone deciding to follow, as Camiko stands as his only lead out of poverty after his dealings with the Buhemons.

There in church, they'd meet the clergy, the church's High Priest Sesuna, and the one that'd help staff them, clergywoman Mullo. She let them work at the place, and Simone would be prompted to head out into the city to learn about the general layout and the people in it. During his time at church, Mullo would come to learn about the appearance of cult members, cult members of a dragon that was cast out from the Draconic Gardens when they separated from the mortal plane. When this became Mullo's issue, it subsequently became the duo's issue, them serving under her.

With Mullo, Simone and Camiko would battle the cult, recruiting Eredo (reluctantly) and Unaris (not so reluctantly) to their party. In the process, their fighting led them to the long dead kingdom of Eden, regarded as a holy kingdom once upon a time, it supposedly being built upon where the Dragon Eggs would be delivered. There, they would encounter Muerdio, the late, last king before Crusaders ransacked the place. Apparently, cultists would break in, pushing past his defense to steal the eggs that'd be left.

Realizing there was another egg, Mullo declared that they had to go in to protect it. So, they entered on the king's permission, and would try to defend the egg deep in the depths of the castle, only for the figurehead of the cult, Polaris, to appear and overwhelm them. He'd managed to make off with the egg, though Muerdio was able to keep his wits together long enough to rescue them. With the team assembled, they were able to rush Polaris' base, where they'd make off with the egg, only to be intercepted by the figurehead.

Mid-fight, the egg hatched, unveiling a golden dragon. With them hatched, they were able to single-handedly overwhelm Polaris, killing him off and rendering almost all of the cult repentant and subservient. And, like that, Simone and friends would suddenly be responsible for the dragon, them having "imprinted" on them. And so, the group would cycle from day to day, using the various days to teach the dragon something new.

Simone has slight alterations between their male and female counterparts, though the differences are only really apparent when they're in more revealing clothing. They are a mink that stands at about 5', bearing white, short fur and claws, and some whiskers. For their default outfit, they wear a ratty, brown vest with a violet undershirt and dirty beige dress pants, as well as a belt. They're tail is poking out between their pants and their shirt. They also bear a sheathe across their back that their longsword slides into, which they draw out by gripping the handle over their shoulder and pulling the blade out.

Late into the game, Simone is prompted to test out certain weapons for certain missions. One of them a Chainblade, and one of them a Runeblade. After these missions, Simone gets prompted to Rank Up into either one of the respective classes, granting them a more special role in the party.

The below assumes that Simone is at about Level 1. Each stat is accompanied by their growth rate, representing approximately by how much either stat goes up each level up.

Simone wields Runeblades, a special blade developed under ancient manuscripts of Crusaders, which was, at the time, an entirely hypothetical design intended to mimic the magical might of the Dragons. With Runeblades, Simone continues to deals slash damage with normal attacks. He gains a boost to SP, Magic, Mentality. Meanwhile, Strength and Endurance take a dip in growth, while Agility and Luck remains behind. Simone becomes a more Magic oriented fighter, while also obtaining more support power for his allies, allowing them to deal an additional elemental strike upon foes when they act.

Simone wields Chainblades, a special sword designed buy the Noble of Development's team as a powerful tool for tearing down a target with reckless abandon. With Chainblades, Simone continues to deal slash damage with normal attacks. He gains a slight boost to SP, garners more Strength and a slight bit more Endurance, while obtaining a boost to Agility and Luck, though Magic, SP, and Mentality continue to lower in growth. With the Chainblade, Simone becomes more adept at hitting hard, as he garners one of the most powerful boosts to Strengths of other Rank Ups. He also becomes the only Party Member that's able to cast "arwystl", which provides yet another massive boost to Strength in battles, making them terrifying against foes with low Endurance. However, he continues to falter in Magic, in terms of both attack and defense. 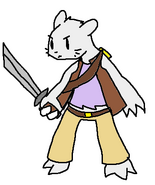 A sketch of Simone for Bunny Day, done by Exotoro (t∣b∣c)

A rough sketch of the Berserker's weapon, a Chainblade 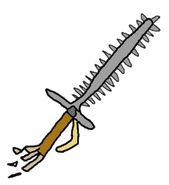 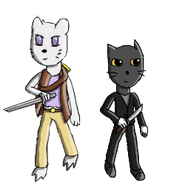 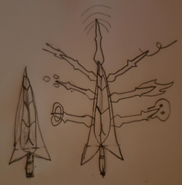 A rough sketch of the Runeblade's weapon, a Runeblade