Wiggler (known as Floruga in Spanish) is a large caterpillar-like enemy (sometimes known to be an ally) that appears in the Super Mario series, first appearing in Super Mario World. They first start out yellow and calm, but when provoked, they turn red and angry.

A Wiggler appears as an unlockable playable character in Mario Party: Third Dimension. In order to play as Wiggler, the player must purchase it in the shop.

Wiggler is part of the Waluigi Smart-Alecks. Wiggler is a speed type.

Mario Kart: Get Behind the Wheel

Wiggler is a Playable Character in Mario Kart: Get Behind the Wheel, It meets up with Dixie Kong in Story Mode.

Wigglers appear in the first two Koopa Kart games, though they were absent in Koopa Kart DS and 3D. However, they are scheduled to make an appearance in Koopa Kart Galaxy.

Wiggler appears as a non-playable enemy in Mario Tennis: Heroes Vs Villains only appearing in World 1-2 The Angry Wiggler. By selecting World 1-2 a cutscene will play. The cutscene shows Mario (with F.L.U.D.D . still on his back) and Toad walking along the beach. They pass by a sleeping Wiggler as Toad says "Wigglers look so harmless when they're sleeping." They continue to walk forwards when they suddenly hear a squish coming from their feet. They look down to notice Mario stepped on a large pineapple. The sound managed to wake the wiggler from his nap. After yawning he noticed that Mario had stepped on his pineapple. He will then begin to turn red with anger and says "You destroyed my food now I destroy you in Tennis!" The match will then begin. The match plays like a normal tennis game on the Delfino Plaza court. After clearing the match you will either get the "You Lost" screen right after or a cutscene that shows Wiggler tipping over on his back due to him being launched by the great speed of the ball. After a few seconds of struggling he falls asleep. Toad will then say "Phew, that was a close one!" You will then return to the world map which opens the path to World 1-3. You can choose to head back to World 1-1 or continue to World 1-3 Monty Mole's Hideout which is located on Pinna Park on the world map.

Due to Wiggler not being a playable character he does not have a corresponding villain meaning he also doesn't have a Rival Shot. According to his statistics he appears to be a speedy playing type. His trick shots (according to the Toad Announcer) are Enrage Dash (forwards/backwards) in which Wiggler stomps on the ground before dashing forwards quickly and Body Slam (side) in which Wiggler stands on just four of his feet and rushes to the ball to bodyslam on it. His special shot is named Flutter Slam in which Wiggler morphs into a Flutter to fly up super high and come crashing down towards he ball. After this special shot is up he transforms back imto a Wiggler. 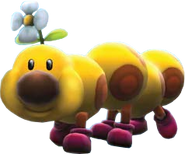 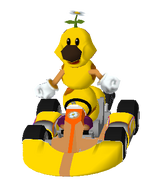 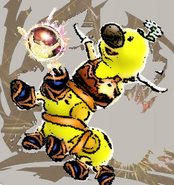 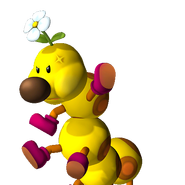 Bone Wiggler
Add a photo to this gallery
Retrieved from "https://fantendo.fandom.com/wiki/Wiggler?oldid=3229922"
Community content is available under CC-BY-SA unless otherwise noted.