Fantendo - Game Ideas & More
Register
Don't have an account?
Sign In
Advertisement
in: Rewrite Planned, Free to use Characters, Collabs,
and 16 more

Widi is a clone of Fera Bolstar, created sometime after the events of the World Tournament in an attempt to replicate the Pyroverse-exclusive phenomenon of Drive in the New Fantendoverse.

Widi looks remarkably similar to Fera, bearing a near-identical facial structure and wearing her hair in a comparable style. However, Widi's hair is a pure-white color and long enough at the front to completely cover one side of her face. This side of her face is mutated to the point of being completely unrecognizable as human, as are most of her limbs. She also appears to be slightly taller and slimmer than Fera. She wears a blue bodysuit with sparse metal plating over most of her body, and wields a metal staff with one hand in combat.

Widi retains many of the traits that made her original counterpart, Fera, such a well-rounded soldier; she's loyal, determined, and skilled in combat. However, Widi is programmed to not only have complete loyalty and obedience towards her superiors, but to also lack any form of compassion on the battlefield, taking delight only in following orders.

In essence, Widi is little more than a robot with higher-than-normal levels of autonomous thinking. While she follows orders from her leaders without question, she does have a goal in mind completely of her own volition; murdering her genetic source material, Fera.

After Fera first showcased the power of Drive during the World Tournament, uHive took an interest in the power's potential. Using DNA and energy sampled from Fera in secret, they attempted to replicate the ability to use Drive, creating Widi in the process.

At an unknown point in time, Widi wished to determine whether she could outmatch her doppelganger when neither of them wielded Drive's power, and traveled back in time to a point before Fera reawakened to its power. 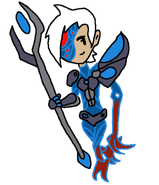