Wham is an armless, hooded, Yo-yo bearing Hoodulem who first appeared in the 2012 game Wham: Off the Walls. He always has his trusty Yo-yo ready, as it is his main weapon of choice.

Wham is very modest Hoodulem, who always seems to get into trouble. Because of this, he is considered a menace to some, and a hero to others. He and his best friend, Knockout, are usually together, and Wham's kind heart always causes him to bail Knockout out.

Orphaned as a child, nothing of his parents are known. He met Knockout at the age of 6, and they practicly became brothers. Knockout's dad, Big Slipper, took in Wham as a second son. After a while, It came, and Big Slipper was taken. This changed his life forever, and he now has a larger appreciation from the people of his hometown, as well as an eye for trouble.

A full artwork gallery of Wham. 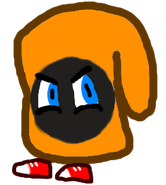 Fantendo Speedway
Add a photo to this gallery
Retrieved from "https://fantendo.fandom.com/wiki/Wham?oldid=1722341"
Community content is available under CC-BY-SA unless otherwise noted.