Whackas are characters and a species appearing in all the non-fanon Paper Mario games. They are mostly known as those "blue mole-like animals that pop up from the ground". Living in many areas, they have only been spotted on Mt. Rugged, Keelhaul Key, and the Downtown of Crag. If hit in the head with enough force, their head will spout an edible and VERY valuable pastry (called a Whacka's Bump) that in sentimental value, it is worth more than 100 coins. However, due to the internal injuries given per hit, many Whackas have been dying. Once a plenty source for valuable pastries, now they are endangered. The population was once under 25 but has raised over time. They are very popular in Fantendo Culture, and their Whacka Day is March 16th.

After the events of Paper Henry the Moose, Henry opened up a large reserve for the Whacka population in turn for a Whacka's help during the Nature Stone crisis. Whackas were found and were told of the reserve. 100 percent of them happily agreed to go, mate, and breed with the others. The population of the species has increased steadily to over 50. The Whackas' leader stated that the "reserve is the perfect safe-haven for all of the Whackas that have been abused". He also claims that the Whacka species will never leave the reserve, thus keeping the Whackas from harm. 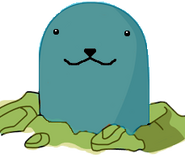 Add a photo to this gallery
Retrieved from "https://fantendo.fandom.com/wiki/Whacka_(species)?oldid=2422454"
Community content is available under CC-BY-SA unless otherwise noted.