Wendell is a minor character in the Animal Crossing series, debuting in the original Doubutsu no Mori and making appearances in just about every single game since. He originally supplied wallpaper and custom patterns, although these days he seems to exclusively appear in dream towns to supply the player with patterns from the town provided the mayor of the town permits it.

When Wendell arrives in a town, he's so hungry he can barely stand. He will pretty much eat anything and deliver you a nice custom design or wallpaper in return. Since he's a walrus, you might think he'd only eat fish, but he'll also gobble up fruit, nuts and...pretty much anything. You could say he's a fan of the "sea food diet".

Doubutsu no Mori and Animal Crossing

Wendell sells wallpaper in Animal Crossing and shows up in the player's town on Saturdays and Sundays, although is known to show up on other days. There is no consistent time of day when he shows up. He is hungry upon meeting the player and will ask for food. In the original Doubutsu no Mori, he would only eat fish, but in later editions he will eat anything from fruit, fish, and turnips. He will give the player wallpaper as a reward during weekends but if he shows up on a weekend he sells it instead. He doesn't stay around long.

Wendell's role is changed up in Animal Crossing: Wild World. He gives out unique designs that are unobtainable anywhere else. He eats fruit, fish, and turnips. Giving him any type of fruit will yield a pattern already obtained, with the exception of coconuts, which yield a different pattern. He won't show up on weekends, instead opting to appear from 6 A.M. to midnight on a random weekday. The only exception is if Redd comes to town. He is said to hail from the town of Tuskany in this game. Wendell is also the first step in the Golden Axe Trading Event.

Wendell returns in Animal Crossing: City Folk with an identical role except the Golden Axe Trade Event no longer exists and Redd has a store in the city, so he appears irregardless if Redd exists or not. He now hails from a town called Sumware. If you had WiiConnect24 on, you could get designs on behalf from Nintendo delivered in character through something along the lines of of "I made this new design, and wondered what you would think...".

In Animal Crossing: New Leaf, Wendell almost exclusively appears in dreams through the whole game. He wanders across Dream Towns allowing him to visit, which is toggled through whether the town author allows their patterns to be copied or not. He has his own RV that visits the campsite, where he wears a vest. The description for his mobile home reads:

With advances in camper-van technology, Wendell can finally feel at home while 'roughing it' with a fully stocked fridge and chef's kitchen.

There isn't any documented information about Wendell able to be summarized for this. Hoping this changes soon!

There isn't any documented information about Wendell able to be summarized for this. Hoping this changes soon!

Wendell is a blue walrus who wears a small beige shirt that exposes his x-shaped belly button on his white stomach. He is often carrying around an easel, a drinking flask by his hip connected by a strap, and an umbrella on his back.

In New Leaf, he ventures the dream world in a pair of striped yellow pjyamas, as well as a yellow sleeping cap. He still carries his trusty easel by his side.

Wendell is a traveling, apparently starving artist who loves fish, although will eat anything. In turn, he will reward the player with unique designs or wallpaper. In New Leaf, he appears in dream towns accessible through the Dream Suite owned by Luna. This shows that he sleeps a lot- and his trophy description in Super Smash Bros. for Wii U suggests that he may be eating while asleep.

Wendell in Animal Crossing NX has a vastly different role in this game, being the owner of a bakery. The player can can bake various types of food using fish, fruit or other ingredients that can be bought here. Recipes will be stored in the encyclopaedia.

Wendell in Animal Crossing: New Leaf 2 has a vastly different role in this game, being the owner of a clinic. Interestingly, it says he's the father of Gulliver, which has never been hinted in the canon. This is apparently where you go when you and your wife are pregenant.

Wendell returns in his role in Dream Towns in Animal Crossing: Exotic Paradise, wandering around. You can trade fish caught in the dream for exclusive patterns. He may also appear at the middle of the night. He also seems to be linked to three holidays centering around foreign countries that gives their flag patterns to the player.

Wendell reappears in Animal Crossing: Switch Seasons. His modus vivendi is to sell paintings made by himself. Once you spot him in the town, he'll ask for food, and you can give him either fruits or fishes, where he'll give you a pattern in exchange, used to place in the ground and decorate it. You can also find Wendell in Dream Towns, where he'll share you some patterns drawn by the people that reside in the town, this time for free.

Wendell is the King piece in the unique Dream Warriors faction in Nintendo All-Stars Chess, which can move one square in any direction and is heavily involved in castling for rooks. If captured, the game will end. The Dream Warriors faction specifically consists of Nintendo characters that are heavily linked to dreams, hence Wendell's role as the King in this faction.

Wendell appears in Nintendo & Fantendo Play: Dodgeball! as part of the Red Faction, the team consisting of Nintendo characters. 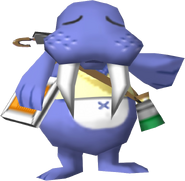 Wendell in Animal Crossing: City Folk
Add a photo to this gallery

Wendell's amiibo card
Add a photo to this gallery

amiibo Festival icon
Add a photo to this gallery
Retrieved from "https://fantendo.fandom.com/wiki/Wendell?oldid=3189113"
Community content is available under CC-BY-SA unless otherwise noted.