It evolves from Koffing starting at level 35.

In Galar, Weezing has a regional variant that is Poison/Fairy-type.

Weezing is a purple Pokémon consisting of two spherical heads connected by a thin tube with another sphere in the center. The heads have differing sizes and features. The left head is larger, and has prominent eyebrows, pointed teeth protruding from its lower jaw, and two flat teeth in its upper jaw. The smaller, right head simply has two pointed teeth, one at each corner of its mouth. The larger head has a cream-colored skull-and-crossbones marking below its face, while the smaller head has a light yellow circle instead. It is covered with many crater-like protrusions, which usually expel yellowish gases. Weezing is said to form when poisonous gases pool and two Koffing fuse over many years. Very rarely, two Koffing can become a Weezing in a short timespan because of a sudden mutation. Triplet Weezing have been discovered, although it is extremely rare.à

Each of Weezing's heads contains a different toxin. It mixes its gases by inflating one head and deflating the other. When its gases mix, Weezing becomes more toxic and putrid. Weezing can hover in midair, presumably due to gases lighter than air, as is the case for Koffing. Despite their stench and poison, Weezing's gases can be used to make top-grade perfume by diluting them to the highest level.

Weezing lives in urban areas. It seeks a dirty, unkempt house and nests there. At night, when the people in the house are asleep, it will go through the trash. Weezing feeds on the dust, microorganisms, and especially gases emitted by garbage and toxic waste. Weezing's body expands and it starts smelling worse upon inhaling poisonous gases.

Considering its looks, its ability to float, and its tendency to explode, it may have been based upon a floating naval mine or living meteorite. It is also based on smog and other forms of air pollution. Weezing may also be based on the imagined fear that heavy pollution, caused by the leakage and/or improper disposal of toxic/radioactive waste, may result in the creation of new and undesirable life.

Weezing is a corruption of wheezing, which means "producing a whistling sound while breathing with difficulty". 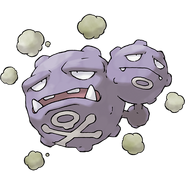 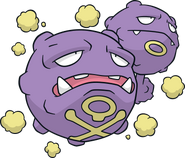 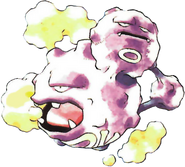 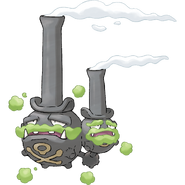 Generation VI
Add a photo to this gallery
Retrieved from "https://fantendo.fandom.com/wiki/Weezing?oldid=3020189"
Community content is available under CC-BY-SA unless otherwise noted.