Weavile (Japanese: マニューラ Manyula) is a dual-type Dark/Ice Pokémon. It evolves from Sneasel when leveled up at night while holding a Razor Claw.

Weavile is a bipedal, weasel-like Pokémon with a pale gray body and several feathery areas. It has a bright red crown and collar made of wide feathers, and a single, thinner feather on each ear. The ear feathers are smaller on a female Weavile. Weavile has two tail feathers and three claws on each paw. There is a yellow, oval marking in the center of its forehead. Its eyes are red with three eyelashes, and four fangs protrude from its upper jaw.

Weavile is devious and intelligent. It usually lives in cold, icy areas where it forms small packs. A pack of Weavile uses teamwork to take down its prey. It can communicate in the form of carving patterns on trees, ice and boulders. 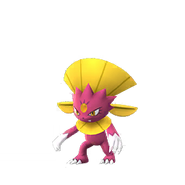