Fantendo - Game Ideas & More
Register
Don't have an account?
Sign In
Advertisement
in: Free to use Characters, What is the New Fantendoverse?, Original Characters,
and 6 more

Watermelon Tourmaline is a spear-fighter from Bahia, who attempted to rebel against her homeworld by going to various different planets with EONS, a robot capable of finding the Hyper Mode Orbs. The character was created by Helena Harper (t∣b∣c) as a new character that would explore the history of Hyper Mode. The character has yet to appear in any Fantendoverse stories, although one is currently in the works.

Watermelon Tourmaline is a Lucent, a white skinned humanoid that is powered by a gem- in her case it would be the Watermelon Tourmaline on her chest. She has a green and a pink colored eye, a form of heterochromia. Her hair is a vibrant green and pink, which has a highly glossy sheen to it and is incredibly hard but can be broken off, requiring healing to fix. Her body has marking across it to suggest she may be a bit more akin to a robot than a flesh and bone human.

She wears a black dress with a white collar and a pair of black shoes. Across her sleeves is a green wrap around and the sleeves are pink. Below her chest is the Watermelon Tourmaline, which allows her to maintain this form and acts as her weakpoint. If cracked, Watermelon Tourmaline would presumably die.

Watermelon Tourmaline is generally seen as a perfectionist, as well as seeing morality in black and white. While she is able to see her own people as bad guys once she realized what they were doing was wrong, Watermelon Tourmaline imparts the actions of her people upon herself. When not actively trying to stop her own people, she frequently hits or damages herself, requiring either a healing bath or a partial regeneration to heal herself so nobody knows that she abuses herself.

Watermelon Tourmaline is somewhat clumsy outside of battle, which goes against her perfectionist personality, much to her annoyance. This is because she has to deal with so many odd gravity types from traveling world to world- when she stays on a planet for much longer than a couple of months, she tends to have better balance.

Watermelon Tourmaline comes from Bahia, a mineral rich planet covered in salt and featuring large, dream-like underground societies full of Lucents, beings powered by gems. Fighters were renown for their prowess with their weapon of choice, as well as their Hyper Mode Orbs that allowed them to access their Hyper Mode forms. All seemed right in Bahia, with tournaments showcasing lesser beings from across the galaxy, of which Lucent Fighters were eager to fight and kill for their audience. Watermelon Tourmaline was training to become a fighter herself, focusing on using her spear to attack.

Slightly traumatized by the experience, Watermelon Tourmaline realized all the opponents had Hyper Mode Orbs, although they had no idea how to use them as they weren't meant for them. Disgusted by the actions of her thieving and murdering people, Watermelon Tourmaline left Bahia in a ship with EONS in search for warriors to help her take down Bahia's terrible empire.

Watermelon Tourmaline has excellent skills with her spear, named appropriately, the Tourmaline Spear. She fights almost as if she is dancing, as is the tradition on her homeworld for fighters. She is able to pierce through shields and cut down water and Blue Energy attacks with it, as well as use it to maim and impale her opponents with it. She can also heal herself using water around her gem, with the water slicking around her body to heal broken pieces of herself. This process is known as Regeneration, and even if her whole body were to die, as long as she has her gem and a pool of water she can be revived. She can also creating healing water to spray on allies, which has a pink and green color.

If her gem were to be cracked, she would be rendered dead forever, with no amount of water being able to heal her. 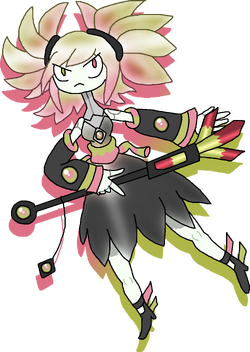 Hyper Form Watermelon Tourmaline is the Hyper Mode of Watermelon Tourmaline, accessible through her Hyper Mode Orb. In this form, her Tourmaline Spear becomes the Tourmaline Trident, which can cut through water and Blue Energy attacks at a much larger radius as well as hold it and shoot it in a tri-beam. She also gains much a faster healing rate and has limited flight abilities, able to fly around close to the ground and can avoid ground-based attacks this way.

In this form, Watermelon Tourmaline becomes more in peace with nature, able to tell where water is from miles away, as well as able to feel the vibrations of the earth to sense where people are. While able to read the earth, she is prone to spacing out and is unaware of her surroundings. She also becomes more irritable and self-loathing in this form; should she fail to defeat her opponent, she will attempt to hurt herself, usually slamming her head into the ground. Due to heightened powers, this can be a serious problem and is hard to stop. Hyper Form Watermelon Tourmaline is generally seen as a upper class Hyper Mode form, somewhere just below Hyper Form Wurm and Hyper Form Unten out of the current echelon.

She has far more experience with this form than any character previously seen in the Fantendoverse, due to her planet being introduced to it earlier than others.