Wasteland Warriors is a game for The V² and helmed by Exotoro. The game follows the Wasteland Warriors, who were introduced in Fantendo Smash Bros. Shattered and features many of the forgotten characters and locales in the Fantendoverse, although there is also several new characters and locales that weren't seen before. In addition to Iron Mask, Scarlet, and PAIN-T 2.0, two new members join, one being a little girl with a bo staff and sunglasses, and the other being a detective with tons of knowledge. This game was announced during a Witching Hour that revealed this game, Kid Icarus: Mythis, and Kingdom Hearts: Denial in Oasis.

Wasteland Warriors is a third person character action game and each character has their own style of play. Iron Mask has a variety of methods for taking out opponents from afar or close up, and is generally the most balanced. Scarlet is fast and makes use of flashy moves that are good for attacking big crowds of enemies. PAIN-T 2.0 is a ranged character that makes use of paint to take care of enemies, such as making paint puddles for them to slip into or blinding them.

In Wasteland Warriors, you will be put into a open world and can go wherever you like. Buy orbs and find collectibles in the vast world of the Wasteland. However, you have missions you also must complete and you can either find them on the map or head to your manager Hooves.

There are also dumpsters spread throughout the entire map that usually has nothing good in it but sometimes you can find rare items or ammo.

The episode begins with a shot of a desert landscape that pans to a train track. A train speeds past with robots crawling all over it. We then pan to Iron Mask.

Iron Mask: Stop the train, we're already here. You may as well give up now.

Orithell pokes her head from the engine room and stick her tongue out as a bunch of robots fly towards him. He slashes them away but one manages to hit him, causing him to fly back to the back of the train. Iron Mask looks at Scarlet who is eating french fries while holding onto the train.

Scarlet: Yep, got it.

Scarlet jumps up to Iron Mask and begins to skate on the surface of the train cars. PAIN-T flies to the back of the train, being caught by Iron Mask.

Iron Mask: We're all just off our game huh?

After defeating a swarm of robots on top of a bunch of train cars, Orithell exits from the engine room.

Orithell: Hope you ready to deal with the Swarm you've pissed off!

Orithell summons a bunch of robots.

Orithell is a pretty easy boss with easily telegraphed hits from her "fist attacks" which consist of a bunch of robots charging in one direction and then scattering everywhere. You can hit directly after these hits and she doesn't have a huge amount of health.

After defeating Orithell, she looks weary and looks towards the engine room. Suddenly, she ducks as the train passes by a low rock bridge that slams into the Wasteland Warriors. The bridge collapses as the train escapes. A portal opens up nearby.

Scarlet: Portal opened. You know what that means.

Iron Mask sighs as he enters the portal.

Hooves talks to the Wasteland Warriors in his office.

Hooves: I mean... I would just get you guys to go after the train but I mean come on, that was so telegraphed.

Iron Mask: Can you blame us? It's just the three of us endlessly taking on these chores...

Hooves: Oh I'm aware of that. As your manager... that's not a good look to get her out like that.

Hooves: Point is that you guys need more than just the three of you.

Iron Mask: Why? Look, this is a tight-knit team we're not just gonna...

Hooves: Listen, listen. I don't wanna hear it. I just think you need some extra help and over a week of searching, I think I've found some good candidates.

The door opens to reveal a little girl with sunglasses and a red coat.

Hooves: She's got a bo-staff and she's AMAZING with that.

Iron Mask: Yeah, too young to be doing this.

Hooves: Look, I get what you're saying. But I think she'll really be a big help.

Hooves: Aaaand I got someone else.

Door opens to reveal a blond woman with blue glasses.

Iron Mask: Who's she?

Hooves: Shirley Watson. She's a detective of sorts, knows forensics and what not.

Iron Mask: Why the hell do we need a detective?

Hooves: You need a detective.

Iron Mask grumbles as Scarlet empties out her french fries.

Iron Mask: I'll give them a shot but I call the shots, alright?

Iron Mask and the Wasteland Warriors look out from the desert landscape.

After going through the desert and heading to the cave, they find the train. Nobody's in there though...

Scarlet: Oh well... I guess we're done here until she shows up again...

Shirley: Erm... she left a calling card of sorts.

Shirley: She left a card with a location... SEED Corp. Deliberately. Likely a trap... but we have to probably check it out.

Iron Mask: What was she even after anyway? If she left the train...

Shirley pounds on one of train cars, a hollow empty sound echoing.

Iron Mask: She was transporting resources... but where?

Scarlet: God, who fucking cares? She clearly wants us to fall for her fucking trap, let's just go already. Goddamn.

The Wasteland Warriors leave the cave and the episode ends as they head out into the sunset to SEED Corp.

Shirley: Alright, so this place seems to be pretty heavily guarded.

Scarlet: Yeah, I can tell. What else do you want to tell us? There's lights on?

Shirley: Well, I was explaining that we'd have to get in sneakily without being caught.

Scarlet: I think most of us figured that.

Iron Mask: Jeez, why are you ragging on her so hard?

Scarlet: I dunno. It's late and I haven't had anything to eat except fries.

Iron Mask: Yeah about that-

Scarlet: Don't worry, I vomited it out like a couple minutes ago.

Scarlet: Haha, not if I wanna keep this figure.

PAIN-T: We can worry about this later. Let's just get inside the SEED Corp building.

The player must sneak past heavily armed guards that can kill their characters in relatively few hits; if the player decides to attack the guards, it will be near impossible to win the mission. As the Wasteland Warriors get inside the building, they'll find it's relatively empty.

PAIN-T: I have to take Iron Mask's side on this...

Scarlet: You're always agreeing with Iron Mask. What, are you in love with him or something?

Whitney: Jeez, you guys really are a dysfunctional bunch, huh?

Shirley: Well, getting back on track, I can see that a pair of heels went down stairs over to the left judging by the muddy trackings.

Scarlet: Why does she go around in those stupid heels anyway? I imagine they're a huge limiting factor for her.

PAIN-T: Why do you go around in those skate boots?

Scarlet: They let me glide.

The group heads downstairs where they are suddenly met with a bulky robot standing in their way. It attempts to attack them. 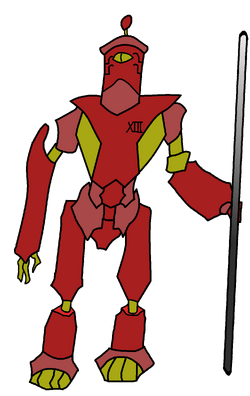 Classic XIII is a fairly easy boss. While he attacks with the staff, his attacks are telegraphed and you'll know he'll block or attack, allowing you to counter. There's no real gimmicks, though using projectiles won't really get you anywhere.

As the group takes down Classic XIII, alarms ring out.

PAIN-T: We should probably go...

Iron Mask: When we're this far?

Shirley: We need to get farther in. Find a clue or something-

Iron Mask nods as he heads deeper inside.

Iron Mask: What other choice do we have?

The player hurries down the hallway, running from enemies. They need to shut off the doors behind them to prevent enemies from catching up to them, so one character has to lag behind to shut the doors off. When they get to a dead end, they find nothing.

PAIN-T: We can get out, just let me find a weak point in the wall here...

Iron Mask: What do we even know about SEED Corp? What do they manufacture?

Shirley: Robots, judging by this. They've been getting supplies from a couple of sources, including Orthell.

Shirley: Their main costumer is a complete mystery. For now. Give me a week at most to figure out a list of possible revenues.

PAIN-T breaks down the wall, revealing the outside. The Wasteland Warriors crawl out.

Episode 3: Called Out In the Dark

Whitney, one of the new members of the Wasteland Warriors. (new art coming soon)

Shirley Watterson's old design.
Add a photo to this gallery
Retrieved from "https://fantendo.fandom.com/wiki/Wasteland_Warriors?oldid=3211121"
Community content is available under CC-BY-SA unless otherwise noted.