Princess Warupichi Plum (ワルピーチ in Japan (Also known as Princess Plum in some games)) was a character originally going to appear in Mario Tennis 64 as rival for Princess Peach much like Waluigi was for Luigi, but this idea was scrapped and Warupichi never made it into a game but still appears in the fanon game Mario Party Eclipse as a playable Character. Her partner is Pauline.

Her best friends include Wario, Waluigi, and Warudeiji.

Warupichi looks similar to Princess Peach but with a fatter facial structure, chubby waste and a poofier violet dress with indigo frills. Warupichi's hair is in a bob cut with curtain bangs and is strawberry-blonde in color, her jewelry is pink and is in the shape of spades (but was diamond's at first) and her eyes are green, she has a brooch like Peach's but in silver rather than gold. She has a dress similar to Peach's classic dress but with an extra line at the bottom.

Warupichi is vain, greedy and full of herself. She only cares about publicity and fame and wants to be the biggest villain in the Mushroom Kingdom. 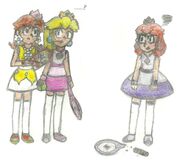 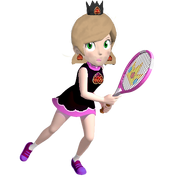