Wario World U is a game released for the Wii U console as a sequel to the Nintendo GameCube game, Wario World. It was released in Europe and Australia in January 5, 2013, in Japan in February 09, 2013 and in the United States in February 12, 2013.

The game begins with Wario in his new golden palace built in a land called "Marshmallow World". When he visits his treasure room, he finds out that all of his gold coins, diamonds and crystals are gone. The ground starts to shake and the palace explodes and is destroyed, as Wario is thrown away. Wario sees Adamon, a diamond-like thief, to steal all his treasure and the land's ruler, Prince Mashumaru and take them to his own castle, making all the Marshmites scared. Wario then, sets off to rescue the prince and all of the stolen objects.

Just like its predecessor, Wario World U is a tridimentional platform game. In each level, the player must beat a boss, collect four treasures and grab an amount of coins. Each world has two levels and, after both are completed, the world boss fight can be played. Wario also has a set of moves that can be used to use objects and defeats enemies.

When Wario defeats a number of bosses, a new mini-game is available in a room in his palace. Wario can win mini-games to get a large amount of coins and extra health. There are three mini-games that can be unlocked:

Wario World U is divided in eight worlds, each one with two levels, with a total of sixteen levels. The worlds can be accessed by areas in Wario's Palace. 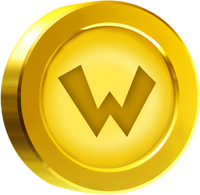 These are simple enemies that appear in the majority of levels.

Wario has a variety of moves in the game.

Wario also has three special attacks, that can be used on enemies and Golden Columns.

Retrieved from "https://fantendo.fandom.com/wiki/Wario_World_U?oldid=1331422"
Community content is available under CC-BY-SA unless otherwise noted.