Wario Land: Hunt for the Ring is a 2.5D platformer developed with the assistance of Nightcap Devs. for the Nintendo Switch.

Wario is seen at his house reading a page on his laptop. He sees an article about Mario in Tostarena. He decides to ignore it and keeps scrolling down until he finds a page about the Tostarena Ruins. He reads about the Binding Band, which is known for it's ability to bring people together. Seeing it as a very valuable treasure, Wario wastes no time getting inside his car and making his way to the Sand Kingdom.

Past the first world

After getting past the first world however, most of the people have heard about the commotion Wario has been causing outside of the town. Mario, who happens to be in the town at the time, suspects that Wario is here to take the Binding Ring and does his best to stop Wario.

After beating Knucklotec,Wario takes the Binding Band and starts to celebrate. As he's celebrating,The area around him starts to collapse. Wario makes his way towards a door in order to escape. From this point,you'll take control of Wario again and you'll need to escape the Ice Cave before time runs out.

If you manage to escape the Ice Cave,Wario will land on a jaxi. Wario will then look in the distance and see an angry crowd of Tostarenans. Wario will then force the Jaxi to speed forward. Wario will end up outrunning the angry mob and laughing. Wario and Jaxi will run towards the sun before the game cuts to the credits.

Once the credits stop rolling,you'll be rewarded with an ending. The ending you get depends on the amount of coins you have when you escape the cave.

Wario can be seen on an open field with the Jaxi he used to escape. He will then hop of the Jaxi and look around. He decides to use the money he collected to build a new and better house. The scene then cuts to Wario sitting inside his new house watching TV and eating Garlic. He will then grab the Binding Ring and hug it before the scene cuts to the logo of the game.

Wario can be seen on an open field with the Jaxi he used to escape.  He will hop of his Jaxi and look around. He then decides to use his money to build a mansion. The game then cuts to Wario's Room,where Wario can be seen swimming in a sea of garlic while using the Binding Band as a floatie. He will then swim towards the balcony and look around. The scene will then zoom out and show his mansion before cutting to the Logo of the game.

Wario can be seen on an open field with the Jaxi he used to escape. He will then hop off his and Look around. He will then use his money to build a castle. The scene then cuts to Wario sitting on a throne with the Binding Band. He will start laughing while the camera zooms out and shows the room filled with Coins. The scene then cuts to a shot of the castle before cutting to the Logo of the game.

Wario and the Jaxi stop at a shore. Wario will hop of the Jaxi and Look into the distance. Wario will smirk before hopping on Jaxi and motioning him to enter the sea. The scene then cuts to Wario sitting on a throne with a crown and the Binding Band. He will then laugh before jumping on a jaxi and running towards the Balcony. The scene will then zoom out from the balcony and show Wario's castle. The scene will zoom out again to show a certain area near the caslte. The scene zooms out one last time and shows the entire island Wario is currently on. Wario will then yell "WELCOME....TO WARIO'S KINGDOM!!!" before the scene cuts to the logo of the came.

This game plays like all the previous Wario Land games. He can perform his trademark shoulder bash and even charge it up to go through enemies much easier. He can perform a ground pound that causes a small earthquake and he can also pick up and throw stuff, and he can also roll into enemies and with enough momentum, he can move very fast across levels. Like the previous Wario games, certain enemies or hazards can cause Wario to react in some way.

Returning from Wario Land II, Wario can't be harmed by enemy attacks. Getting hit by an enemy only causes him to lose Coins. If he falls into a bottomless pit, he'll respawn at the last checkpoint at the cost of some Coins. 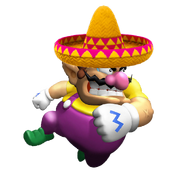 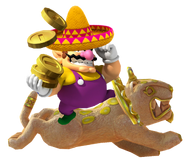 Wario on a Jaxi. 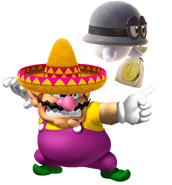 A poster that can be found in some levels.
Add a photo to this gallery

The title screen during day time

The title screen during sunset

The title screen during night time 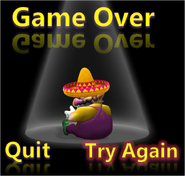 A Game Over screen?!
Add a photo to this gallery

Retrieved from "https://fantendo.fandom.com/wiki/Wario_Land:_Hunt_For_The_Ring?oldid=3021884"
Community content is available under CC-BY-SA unless otherwise noted.