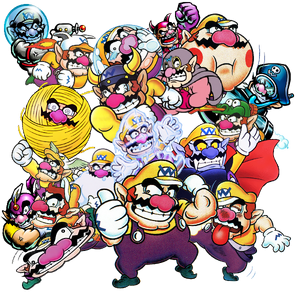 Several of Wario's Power-Ups over the years.

Wario has had various power-ups and transformations over his existence dating back from his original appearance in Super Mario Land 2: The Six Golden Coins. Wario differs from Mario in that he mostly gets his power-ups from Pots and getting hit by enemies than the traditional mushroom or flower. However, he still can use a mushroom or flower to gain abilities.

Wario originally used power-ups to counter and mirror Mario in abilities during his original boss fight in Super Mario Land 2: The Six Golden Coins. Wario used a Carrot and a Fire Flower during his battle with Mario, using them to transition between the phases of his boss fight.

In Wario Land: Super Mario Land 3, Wario uses his power-ups much like Mario in that they act as a extra boost to his health and give him abilities. The Garlic Pot and Bull Pot act much like Mario's Super Mushroom, although the Bull Pot has the added effect of being able to butt stomp and stick to ceilings. The Dragon Pot gives Wario the added ability to breathe fire as opposed to Mario's fireballs from the Fire Flower and the Jet Pot gives Wario the ability to glide into the air. These power-ups were expanded upon in Virtual Boy Wario Land, where Wario could stack the Dragon Crystal and Eagle Statue to create King Dragon Wario.

In Wario Land II, Wario has become immortal and instead power-ups through the use of enemies hitting him or doing otherwise bodily harm to him. These power-ups (called Reactions in Wario Land 4) usually are specific and take away a lot of Wario's usual moveset and have specific puzzle solving abilities. These transformations would be expanded upon in Wario Land 3 and Wario Land 4. Wario can use Reactions even when mortal, as seen in Wario Land 4.

Wario is able to use Disguises, as introduced in Wario: Master of Disguise that allow him to shift into various power-up forms at any time. Wario needs the help of a magic wand called Goodstyle to use these disguises though.

In Super Wario Odyssey, Wario forcefully obtains the help of a Bonneter by the name of Bowler. This character allows him to Capture and take control of items and enemies in a identical fashion to Cappy.

Wario generally has had three types of unique Power-ups:

The purpose of each is listed above. He is able to also use some of Mario's power-ups, like the Metal Box and Fire Flower for instance.

Power-Ups for Other Characters

As seen in Super Wario & Kirby Maker, Waluigi and Ashley can use Wario's Power-Up pots and some of his Reactions to transform and gain new abilities. Waluigi does not seem to have different abilities when using these power-ups, but Ashley can channel different spells depending on which power-up she uses.

Retrieved from "https://fantendo.fandom.com/wiki/Wario%27s_Power-Ups?oldid=3186266"
Community content is available under CC-BY-SA unless otherwise noted.