Waria is Wario's female cousin. She thinks Wario should be fitter and more intelligent. She has a little sister, Walice who is taller than her. She's Maria's friend who thinks that their cousins should be friends. Luise and Walice are friends too.

Waria's personality is a bit selfish but also careful. She loves money like her cousin and she always says: "I'll get married with my money! Ha!".

Waria wears a similar outfit to her cousin Wario. She wears white gloves, pink/purple overalls with a pink skirt with red buttons, a yellow long sleeve shirt under, and black boots. She wears a yellow cap with a girlish W on it. She has blue eyes, long light brown hair, and puffy lips similar to Peach. Her body composition is similar to Mario's.

The cart that she uses is called the Yellow Warp Pipes. It a kart composed of a lot of yellow warp pipes and four wheels. It's similar to the Piranha pipes from Mario Kart: Double Dash but that is more little than Piranha's and yellow because it's her favourite colour.

She uses a secret movement: the Torpedo Dance. Waria uses the move in Mario and Sonic games. When she makes that she wears a torpedo one her back. She jumps and run twice fast so she can be very fast. When she knock anybody down, the victim won't be able to move. She uses a dance when she runs with the torpedo.

Waria gets on well specially with her cousin Wario. She always talks about him. She loves her cousin a lot above all because he gave her the hat she always wears. She has a good chemistry with Waluigi and Maria. Waluigi usually visits her and helps her with the problems. Maria has been her friend since their childhood and they usually have contact but they have a little rivalry. She also gets on well with her sister Walice but they haven't much contact. They prefer to be with their cousins. Waria has fell in love with Mario. She loves all the heroisms when Mario rescues Peach but Mario is Peach's boyfriend.

Waria is against Bowser because she was taught that Bowser is a monster so she helps Mario and Luigi to defeat Bowser. She hates Goomba because she thinks Goombas are repugnant. She doesn't like Princess Peach because she thinks Peach is a bit twee but maybe there is other reason: Peach is Mario's girlfriend so she is confronted with her. She's afraid of Donkey Kong because monkeys have frightened her since she was a baby.

Baby Waria is Waria when she was a baby. She was friend of Maria but she had little arguments. She used to play with Walice, Luise, Maria, Wario, Waluigi... She was vaid like her sister and she used to like to paint her eyes, to comb her sister and friends. She wasn't in love with Mario yet, even she upseted him a lot of times but she has changed since she was a baby.

In Mario Kart 8 she usually drives the Locomotiver. It's a car that appears to be a locomotive. She uses the Locomotiver because it's like a train toy. She loves toys. Her special item is the Mini-Chomp. This item goes back the racer who goes in front of her. She loves Chain-Chomps because she thinks they are her pets. 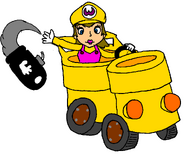 Waria in her kart