View source
“My mind shines like the sun!”
— Walice in Mario Kart 8

Walice (also known as Waluise) is Waluigi's female cousin and Waria's sister. She is Luise's friend like Waria and Maria. She wants her cousin to be more independent. Walice is Daisy's friend and she says they usually go shopping and Daisy invites her to go to Sarasland some days.

Her personality is big-headed. She's clever and Waluigi asks a lot of thing when he doubt. She says that her mind shines more than the sun. Walice thinks Waluigi is funny, he's like a clown but she loves him a lot.

She has always been a person who wants to be an artist. She has a lot of pictures in her house

and a studio where she makes her pictures. She earns a lot of money when she sells her pictures. Toads love buying her pictures because they think they are beautiful and cheap. She is recognised like one of the best artists of Mushroom City. His cousin Wario is her manager and he earns the 30% of profits.

Her favourite colour is light purple and she always wear a purple hat with a little "gamma". The hat is a gift from her cousin Wario.

Her special item is the Magic Brush. She can paint in a race or a match everybody. In Mario Kart series the screen is painted with the brush when she use that. When she paint the screen, the effect doesn't go for long time. She use that item because her dream is to be an artist.

Her kart is called the Dark Carriage. She loves dark colours so she drives a carriage that is dark purple. She usually uses Waluigi's kart because she's repairing her's.

In Mario and Sonic games she uses a special move: the dark dance. She spins with a lot of speed. In a race she's able to run twice faster. In a match she can hit her rivals and make them feel sick. When she makes that move she can be dangerous.

Walice is a fast person but she isn't strong enough.

She has a special good chemistry with her cousins Wario and Waluigi above all with Waluigi. She prefers Waluigi because he is more affectionate than his brother. Wario is generous with her so she has good chemistry. She has a good chemistry with her sister Waria but she isn't enough time with her. Waria prefers to go with Wario. She is a good friend with Daisy and Luise but she doesn't complain why Daisy isn't Waluigi's boyfriend. Walice and Luise has recently a rivalry but it's not important. Luigi has been a friend since their childhood; they have usually had contact. She also loves Yoshis.

She has a bad chemistry with Bowser and his family. She was taught that Bowser is a bad spirit and it's a horrible monster so she helps Mario and Luigi to save Peach. She also hates Boos. She isn't afraid of them but she doesn't like ghosts. She hates Professor E. Gadd because she think he's crazy and he destroy science and he don't help Luigi with the paranormal problems is his mansion.

Baby Walice is Walice when she was a baby. Her favourite friend is Luise and she used to play with Maria, Waria and Luise.﻿ She is very vain like her brother. Although she is Luise's friend, she has little frictions with her. She usually compete against Luise but they get bored at the moment.

Her favourite item is Oil Barrel. In Mario Kart 8 she use that item to slip the racer who goes across the oil which Baby Walice throw in the tarmac. It can make a big problem to the affected person. She loves this item because Walice thinks it's funny to see other racers slipping. But her sister Waria thinks it's a stupid item. 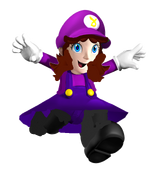 Walice driving the Dark Carriage with the Magic Brush