Vulcan is a class 6 hawk, being geneticaly modified, he gained his own control and an identity, the green feathers are filled with radio-activity and the red eyes are just natural, he can fly naturaly but for certain parts of his life he had Metal Tektite installed in his wings, so it could cover his body like an armour, he can also shoot Tektite knives at enemies.

Vulcan has been mistaken for a pokemon many times by Cortez, because his attacks are strikingly similar to one, like Hyper Beam, Peck, Fly and throwing his tektite wings as blades. 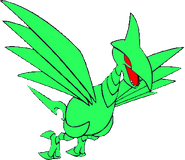 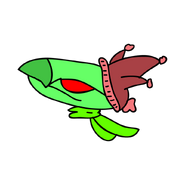 Add a photo to this gallery
Retrieved from "https://fantendo.fandom.com/wiki/Vulcan?oldid=2401737"
Community content is available under CC-BY-SA unless otherwise noted.