It evolves into Electrode starting at level 30.

Voltorb is a spherical Pokémon that looks like a buttonless Poké Ball with angry eyes. The top half is red, while the bottom half is white. Because of its resemblance to Poké Balls, it is thought that it was created when one was exposed to an energy pulse. It was first seen in the plant where modern Poké Balls were invented. Voltorb is generally found in power plants and other areas with electric fields. It has a volatile temperament, and will explode if bumped or agitated.

It seems to be based upon the concept of a living Poké Ball (with its Shiny form possibly being based on a Great Ball). The idea of them being mistaken for the standard Item Balls is similar to "Mimic" monsters found in other RPGs. Given its tendency to explode, it could also be based on a bomb. The design concept may be inheritance from the time when the franchise was known as Capsule Monsters, as early artworks show Poké Balls without the button in the middle. Its unpredictable tendency to explode, as well as its shape and name, may be a reference to ball lightning.

Voltorb is a combination of volt and orb. 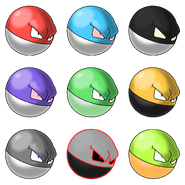 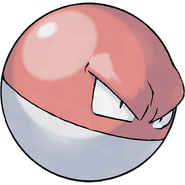 Voltorb's Official Artwork
Add a photo to this gallery

Generation VI
Add a photo to this gallery
Retrieved from "https://fantendo.fandom.com/wiki/Voltorb?oldid=2184474"
Community content is available under CC-BY-SA unless otherwise noted.