Vivian is a Shadow and partner of Mario. Vivian takes a similar appearance to the other two Shadow Sirens Beldam and Marilyn, and is known for using fire-based attacks. She first appeared in Paper Mario: The Thousand-Year Door.

In the original Japanese version of Paper Mario: The Thousand-Year Door, Vivian is shown to be a transgender female, which the other Shadow Sirens disapprove of. This is censored in most international releases of the game, which include no mention of Vivian being a trans woman and remove lines in which characters verbally disapprove of her gender identity, only referring to her with feminine pronouns. However, Vivian's depiction as a transgender woman in the Japanese release is somewhat controversial as some believe the game represents her in a transphobic light.

Vivian has pink, rosy cheeks, which may be her eyes, but it's also possible that her eyes are hidden by her curly, pink hair. She is thinner than Marylin, but fatter than Beldam. She is the youngest of the Shadow Sirens and this is slightly obvious.

Vivian's history is mostly unknown, but it's likely that she was born after the Shadow Queen's defeat, since she doesn't recognize her. She is first seen when Grodus calls her and her sisters to him in PMTTYD. Later, she appears in the Boggly Woods searching for Mario. She found Flurrie's necklace, but it is taken by Beldam when Beldam punishes her for losing the Mario portrait (that Beldam had the entire time.) She is punished once again when she calls her and her sisters the Shadow Beauties, and Beldam decides to keep the necklace forever. However, on their way to escape Mario, Beldam drops the necklace. Vivian starts to grab it but flees without it. Later, she is seen once again in Twilight Town. When Mario has lost his body and name, she falls in love with him when he helps her find the Super Bombomb. She is his only partner for the rest of the chapter, and joins Mario from there on out. In the end, it is said by Goombella that she was treated much better by her sisters from then on.

Vivian appears as a playable character in Super Mario Spikers, appearing as a Skill-type captain. Her outfit more or less resembles her traditional one, though she also has a red skin-tight suit with white stripes, matching her hat. She has also gone under a slight redesign, with her head being less round, her hair going through a number of changes, and one of her eyes being visible, with the other obscured by her hair. Her emblem is her hat with a purple "V" under it, and her theme is Gothic Rock.

Vivian appears as a unlockable racer in Mario Kart: V² Circuit. Like the rest of the characters, she can be unlocked randomly by placing first in a Grand Prix on any engine class. Alternatively, she can be purchased at the shop by collecting Coins. She is a lightweight with a medium size. She has good speed, very poor acceleration, good handling and good traction. 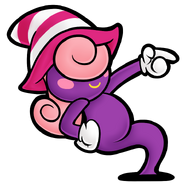 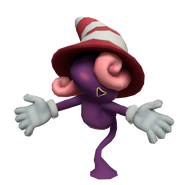 Dark Vivian
Add a photo to this gallery
Retrieved from "https://fantendo.fandom.com/wiki/Vivian?oldid=3197737"
Community content is available under CC-BY-SA unless otherwise noted.