“Ha ha ha ha ha ha! Nice shot, if I do say so myself! Good riddance, human scum! The world's better off without you!”
— Viridi, Chapter 11 of Kid Icarus Uprising

Viridi (Japanese: ナチュレ Nachure) is one of the characters that first appear on Kid Icarus: Uprising. She is the Goddess of Nature, a deity that looks for a perfect nature and wants to destroy all the humans. She appears in said game from Chapter 11, in which she sends a Reset Bomb to destroy a human city. She starts a rivalry against Palutena and Pit, since they try to stop her plans.

Viridi is the Goddess of Nature and one of the most powerful gods, since she has an army of natural creatures. Viridi is arrogant and always hides her feelings if they are going to agree Palutena or Pit. Her plans are usually evil because she always wants to destroy humans because they destroy the nature. She is intelligent and she will do whatever is necessary to get her objectives. Viridi thinks that everything that Palutena does, can be done by her better. In the last chapters, she cares for Pit. She even welcomes him in her palace while Palutena was controlled by the Chaos Kin or when she was petrified.

Her main enemy is Hades, who is killing all the humans with anti-natural ways, invades her Reset Bomb Factory and stop Viridi's plans. She sometimes finds Pit as the principal enemy that must be killed and Palutena as a know-all goddess. She has several servers like Phosphora or Arlon. In the final chapters, while Palutena was the enemy, she gives the Gift of Flight to Pit and Dark Pit.

Viridi appears as a playable character both in KirbiMiroir's World and in the Final World, serving as one of the main protagonists of the game.

Viridi is introduced in 1-3, appearing as a damsel-in-distress who joins the party after being rescued. After 3-5, she is taken out of the party until her rescue in 4-3, in which she is found unconscious in Zozo. It is in 5-3 that her identity as the Goddess of Nature is revealed (prior to this the party thought she was an ordinary girl), shortly after which she battles Medusa and is entitled as the "Heroine of Nature" by Palutena.

As a party member in KirbiMiroir's world and associated parts of the Final World, Viridi is categorised as a Red Mage. Consequently, she is able to use Red Magic to damage enemies and support the party. While these spells can be very effective, this comes at the cost of having the lowest HP in the game (with only 3955 HP at Level 99, which the player isn't expected to be anywhere near by the end of the game). 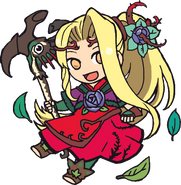 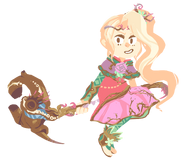 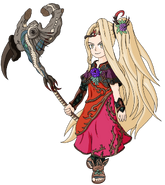 By kylain oshiro
Add a photo to this gallery
Retrieved from "https://fantendo.fandom.com/wiki/Viridi?oldid=3171833"
Community content is available under CC-BY-SA unless otherwise noted.