Vigilants is a third-person shooter developed and published by Ghostrealm Studios. Intended to be a spiritual successor and love letter to both the Star Fox and Halo franchises, it focuses on two teams of mercenaries, the Vigilants and Blackguard, as they clash throughout the galaxy.

The destruction of Jalgor brought immense change to the galaxy. While new groups formed and existing ones interacted, other events occurred. Namely, the emergence of a mineral known simply as Astrium. The mineral's benefits were quickly discovered as various groups went after it. And of course, conflicts emerged.

In the midst of this conflict, a mercenary team formed known as the Vigilants, led by a krexxon named Yikkal. He had always sought to become a mercenary, having heard stories of one specific mercenary who actually went as far as to end the war against the Circle of Shadows, before promptly disappearing into legend. Yikkal rallied his team, and although they succeeded in a few missions, they knew they had to seek out Astrium in order to become more capable of taking on any threats in their way. 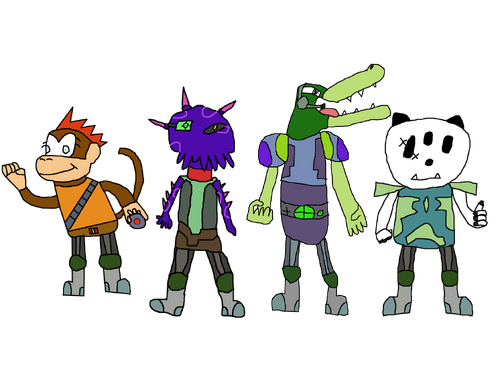 As the Vigilants, they were ready to take on anyone in their way.

Vigilants supports optional gyro aiming as an alternative to using

Vigilants is a third-person shooter revolving around objective-based missions that feature two distinct gameplay styles: vehicular combat, and on-foot segments. However, you can seamlessly move from foot to vehicle, and most missions take advantage of this.

Vehicular combat is primarily done within a ship, though ground vehicles exist. Unlike most piloting-based games, Vigilants doesn't have any on-rails segments, opting for missions with a set area to go after objectives in. Ships are capable of various maneuvers, from barrel rolls, to banking turns, to U-Turns, to boosting. Uniquely however, ships can be customized with a myriad of weapons, allowing you to choose your playstyle so to speak. Ship parts can be crafted in between missions using the Astrium collected from them, and you can always replay missions for more of it. Sometimes there's even temporary events that'll get you going to past missions!

Multiplayer is a major focus in Vigilants, with a myriad of gamemodes to choose from. While the singleplayer campaign has you playing as Yikkal, multiplayer has you choosing any of the four Vigilants' appearances as your character. Multiplayer maps are designed around seamless transitions between vehicles and on-foot combat, though some maps limit your travel options. In addition, ship customization is disabled, with several pre-built ships available to use.

Various gamemodes are available, each with their own objectives. Teams can also be enabled or disabled for matches.

Ship weapons are divided into three categories, with you choosing one of each:

Vigilants started development as a Star Fox game designed in a similar vein to Star Fox Assault, in that it had a heavy multiplayer component and seamless foot to vehicle transitions. However, it was later decided that it'd be an original IP due to the potential for uniqueness.

Krexxal (t∣b∣c) sought to remedy many of the problems with Star Fox, namely its failure to embrace the direction Assault was going in. To that end, the multiplayer mode was given its chance to shine, with more ridiculous weapons and a better control scheme.

Retrieved from "https://fantendo.fandom.com/wiki/Vigilants?oldid=2692849"
Community content is available under CC-BY-SA unless otherwise noted.